Features
Commissionaires: Your gateway to greatness 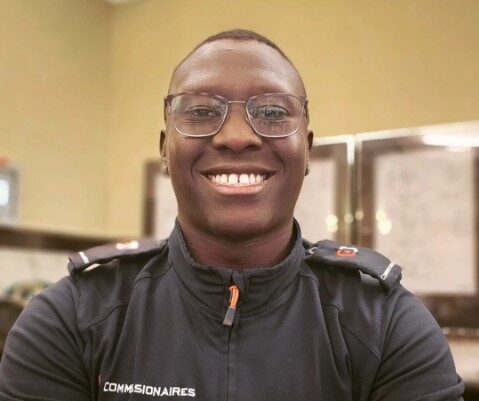 Gabriel Poulino is turning in his ID card at Commissionaires for a badge that says ‘Sheriff’. He’s part of a new generation that joined Commissionaires to gain valuable experience for a future career.

Gabriel Poulino knows what he wants. And he came to the right place to get it.

The 30-year-old from Congo joined Commissionaires in November 2021 with eyes on a career in law enforcement. He entered the Corps as a security officer, then was promoted to Site Supervisor. Within 12 short months, his hard work had caught the attention of Nova Scotia Sheriff Services, and Gabriel was offered a new job. He has since started training to serve as a Sheriff, moving him one step closer to his “ultimate career goal” – joining the police force.

“Nothing is holding you back; there is so much potential,” said Gabriel, adding, “You’ve just got to want it.”

“If you want it, you can get it. My start with Commissionaires put me on the path to big opportunities.”

He says Commissionaires served as an excellent training ground following his post-secondary studies. Gabriel is a graduate of criminology from St. Clair College in Windsor, Ontario, but knew he’d require real-world experience and the right contacts to launch his professional career.

Commissionaires is trusted by law enforcement because of the professionalism of its people, many of whom come from a policing or public service background. As a not-for-profit, Commissionaires has a social mandate to provide meaningful employment to Armed Forces and police veterans, as well as others who wish to contribute to the security and well-being of Canadians.

“The exposure that Commissionaires gave me was really beneficial to my growth as a young, career-driven person,” said Gabriel.

“My work with the organization has prepared me for the type of circumstances I’ll face in law enforcement.”

As a Site Supervisor, Gabriel oversaw the work of roughly 20 commissionaires across three government sites. The role put him in direct contact with Sheriff Services and key members of government.

After Gabriel announced his new role with Sheriff Services, he received an outpouring of congratulations from his colleagues and members of government. He was treated to lunch, received several cards, and was even given homemade cookies to mark his departure.

Fortunately, Gabriel won’t be far from his former colleagues in his new role with Sheriff Services.

“I will definitely be seeing some of my former co-workers,” said Gabriel. “They’re all awesome people.”

There are many reasons to start your career at Commissionaires. The organization can provide you with a fulfilling, long-lasting career or be a great stepping stone to other professional ambitions.

Learn more and apply at commissionaires.ca/careers.