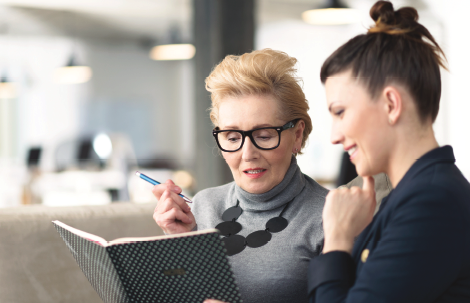 Two empirically validated forms of development activity can be further utilized to enhance organizational capacity – coaching and mentoring. While closely related, they are distinct and important functions present in healthy work forces.

Coaching is a process usually undertaken by the immediate manager (or supervisor) with a focus on refining specific skillsets or competencies. The coaching process helps to equip officers with the knowledge and tools needed to achieve job specific goals. It includes creating opportunities for growth and success. Coaching can be formal or informal and the relationship is generally shorter in duration than that of a mentorship. The informal coaching process involves five steps: forging a partnership and a level of mutual trust, inspiring commitment, skills growth, promoting persistence, and shaping the environment.

Formal coaching programs are quite individualized. However, they typically have several common features: one-to-one relationships, an extensive preliminary battery of tests/instruments, clear development plans, regular meetings, possible inclusion of role play, immediate feedback, and identification of values or behaviours to be demonstrated and espoused.

A critical component of formal coaching is the establishment of a developmental plan. It provides a road map with specific goals, timelines and means of evaluation. Coaching is highly performance driven. It is believed lessons learned from coaching programs lead to permanent behavioural change.

On the other hand, mentoring involves a long-term, personal relationship between a protégé and a more experienced mentor (usually someone a number of levels above the protégé). Mentorship is development driven. The mentor can be a sponsor, guide, or role model and act in one or all of these roles over time. They provide the protégé with counsel, knowledge, and support — particularly in career development. Guidance can also be extended in areas such as organizational politics, strategy and personal development. Like coaching, mentoring too can be formal or informal.

Mentors and coaches play a critical role in inspiring commitment, supporting skill acquisition, developing persistence and fostering understanding. That being said, mentoring differs from coaching in a number of respects. Mentoring often does not target specific development needs but rather long term career goals and can involve an external person, outside the organization. In private industry, business managers often utilize mentorship programs to enhance productivity, recruitment and opportunities for employees to develop talent.

For a mentorship relationship to flourish, mutual trust and a deep admiration for the mentor must be in place. The mentor must also be highly invested in guiding their mentee. Cross-gender mentoring is certainly possible but can be more complicated and is less common. A mentor must also want success for a protégé even if they exceed their own knowledge or accomplishments.

Facilitating mentoring — such as allocating a number of hours per month to meet with a mentor — encourages the progression of individual careers and benefits organizations as a whole. Mentors have direct communication with protégés but generally do not interact with immediate supervisors in relation to them. Immediate supervisors are indirectly involved and provide performance feedback specific to one’s current role.

For example, a protégé under the guidance of an astute mentor would learn to consider recruiting the most qualified and talented persons for their teams, even if it meant those recruits would have more qualifications or education than they themselves. Forward-thinking and confident leaders or managers recognize hiring the most qualified personnel is not a personal threat but rather an opportunity to shine as head of highly effective and productive teams. Having a highly talented and qualified team also makes the job of managing easier. A manager stands out when he or she has the backup of a well-performing team.

Mentoring programs can also have a number of positive, unexpected results, such as assisting first responders to identify and then address Occupational Stress Injuries (OSIs). The strong bond between mentors and protégés increases the likelihood emotional or psychological changes are noticed and taken care of. Mentoring relationships can also address generational gaps by bridging differing views and approaches.

Mentorship and coaching programs can allow first responder agencies to remove barriers hindering success for their diverse human resources. Whether a coaching or mentorship relationship is most suitable will be individually based and largely dependent upon respective stages of personal and professional development. They are highly successful approaches which address employee satisfaction issues and promote retention.

Isabelle Sauve is a 12-year veteran with the OPP, currently with the Lanark County Detachment. She has a MA in psychology and is a PhD candidate. She is also an ultramarathon/ endurance athlete and the Racing the Planet/4 Deserts 2018 Series winner as well as a Guinness World record holder. She can be contacted at: isabelle.sauve@hotmail.com.