Chief Supt. Amanda Jones is the new commanding officer of the RCMP’s V-Division, Nunavut Territory. A Canadian Peacekeeping Service Medal recipient (among many other awards), she is the eighth person to lead V Division since its creation and the territory’s first female commanding officer. Fresh from a two-year appointment in the Northwest Territories, where she was the officer in charge of criminal operations (G Division), she shares more about her northern experiences and plans for the future. 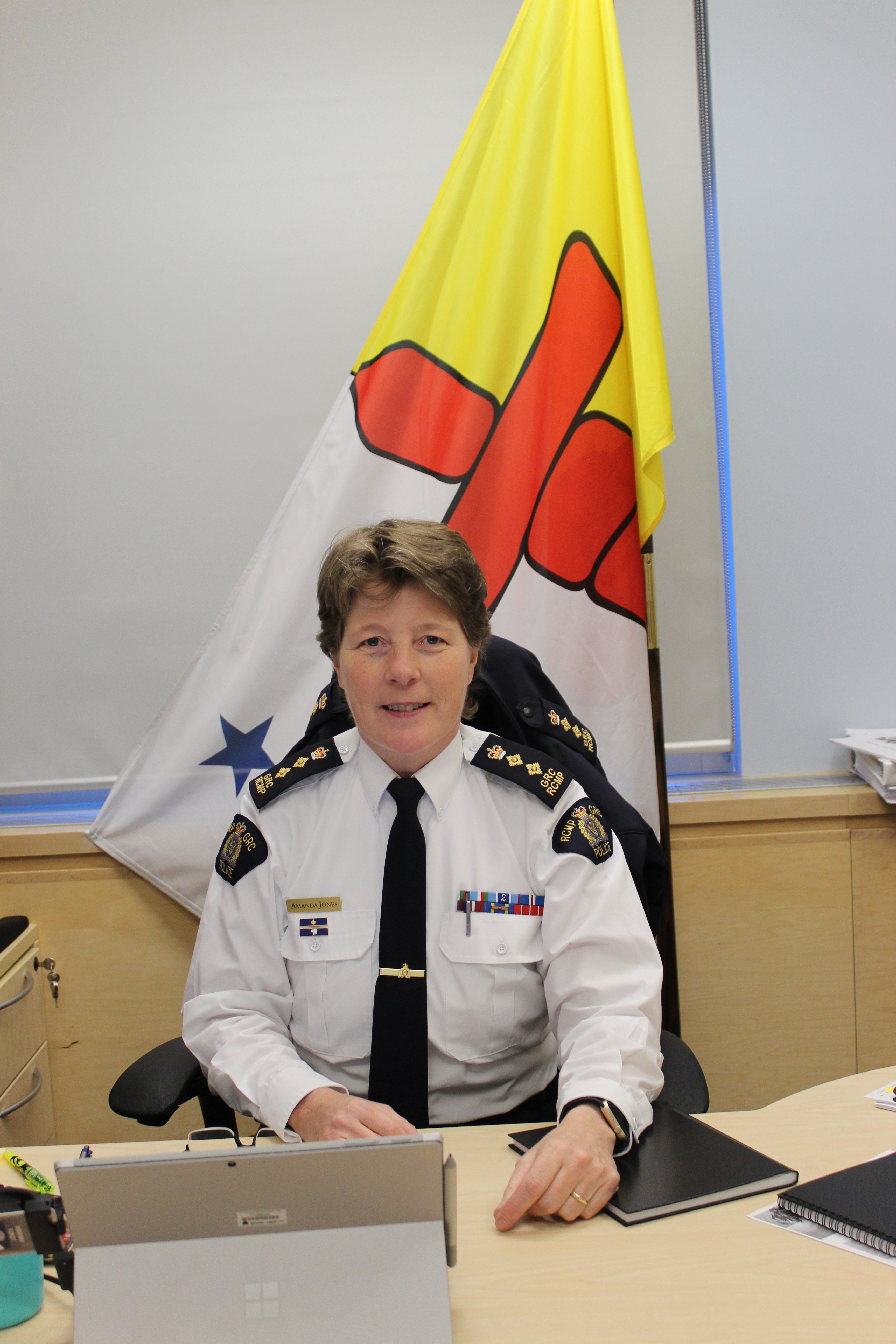 Q: What made you decide on a career in law enforcement?
I grew up with a twin sister and we both told each other we wanted to be police officers and help our community. This was planned from an early age, probably around 8 years of age, when we were living in Montreal. As we got older, we were in the cadet program. We thought we’d maybe join the military but we really wanted to focus on Canada. I joined the RCMP in 1992.

Q: What has been one of the most memorable moments of your career?
When I served on the UN (United Nations) mission to Kosovo for nine months in 2001. Prior to that I’ve been serving in bigger detachments, like Langley and Surrey in B.C. You can easily become overwhelmed there with a lot of files and find yourself not really engaging with the community. We all join the force to make a difference and so with the mission in Kosovo, I felt like I actually did make a difference — I was assisting the new Kosovo Police Service and teaching Kosovar Albanians how to be police officers.

It marked the first time females were allowed to become police officers, too, and I felt like I truly made a difference to the other women in Kosovo who had never been in law enforcement before, and showed them that, yes, they can do it.

Q: Speaking of gender, you are the first female commanding officer of V-Division. Is there a lot of pressure that comes with that?
I’m not feeling the pressure actually. I’m feeling more than welcomed by the members, communities and the government. As a female member in the force for almost 27 years, I have to say I’ve never felt that difference — I’ve always seen myself as a member, not just a female member. I’m very proud and excited for this opportunity.

Q: How have your experiences in B.C. and the N.W.T. prepared you for this role?
The file management skills I learned when I was in E Division in B.C.’s lower mainland really help me. Going to a multitude of different files and being on different units — I was on the major crime unit, serious crime, property crime and general duty — gave me a strong background.

Going to the north, first in Prince Rupert, B.C., and learning to work with isolated First Nations communities, which I’d never done before, gave me the experience to confidently move onto the N.W.T. and now Nunavut. Most people are shocked when they come to Nunavut by the feeling of isolation; I am not.

Q: What are some of your plans for V-Division? What changes do you want to see happen, if any?
I would say I’m the type of person that would come in first and speak to our members. I will be first engaging with them, the communities and the government, and see where we are standing. I know Chief Supt. Michael Jeffrey worked very hard for the division over the past four years, trying to get more resources. I know we’re under resourced so I will pick up where he left off and keep trying in that department. I am engaged with my staff now; there’s been plenty of meetings these past two weeks [in late January] to get a feel for where we are and where we need to go.

Q: It’s been reported you want to bring Inuktitut language training into detachments. Why is that important?
Eighty-five per cent of our population here in Nunavut is Inuit and to be able to communicate with them is important. They’re a big part of us. If we can’t engage in conversation with our community members, let alone take on files and get the community to the point that they can trust us as we speak the language or understand them, then that’s where we need to go. So that’s in the process. It’s also about asking the question how do we do recruiting from the communities, how do we encourage young people in the north to join the force.

Q: What has been a particularly challenging part of your career?
Working on the ground level with a lack of resources made it easy to become overworked and overwhelmed.

It can be a very negative world and many times you’re dealing with the negative side of things. To deal with that I joined the army cadet program. That was my outlet for constructing positive attitudes and working with young people. Working with the community, especially the youth, can offset any negativity you’re holding onto from work. It shows you there are good people, young good people out there. That keeps you grounded through the challenges.

Q: With new leadership under Brenda Lucki, there have been many changes and hopes expressed for the RCMP. What are your hopes for the future?
My hopes are that we can get to a place where we are well funded, so we can bring the resources up to the level they need to be. That way we can ensure we get the training for our members, whether it be operational or administrative. This way they’re not stressed about their jobs and in healthy mindsets.

Respect and harassment have been a big issue for the force. My goal for my division is that we are a respectful workplace and that when my members are in the detachment, they feel safe.

Q: What is your advice to others with dreams of climbing the ladder in law enforcement?
The big thing is patience. Work hard and keep working hard. Value your employees; they come first, well before you. Stay positive. Don’t go into the negative thought process. Lastly, have the strength to make the right decisions, even if they’re not always the most popular decisions.