News
Center for Policing Equity revealed as a 2019 Audacious Project 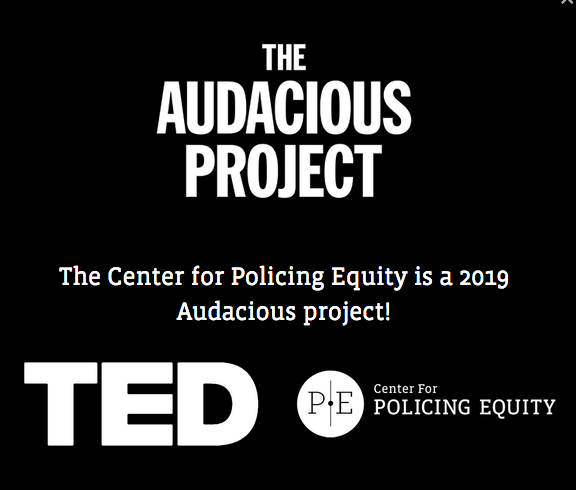 What if science could eliminate racial bias in policing? This question was answered this spring by the Center for Policing Equity (CPE) as the focus of its big idea funded through The Audacious Project. The $30 million of support that has been committed to CPE will be used to further enhance COMPSTAT for Justice, a data tool that tracks police behaviour to help law enforcement agencies reduce racial disparities in policing.

“Support through The Audacious Project gives us the ability to scale American ingenuity, providing opportunity to solve what have for centuries been unsolvable problems of racial injustice,” said Dr. Phillip Atiba Goff, president and co-founder of Center for Policing Equity.

Launched in April 2018 and housed at TED, The Audacious Project pools philanthropic support from a leading group of individuals and organizations and gives it to social entrepreneurs and non-profits with bold ideas. CPE is one of eight projects funded this year from a field of more than 1,500 applications.

“Using an entirely new approach that is proving to work, CPE is tackling issues that are divisive, long-standing and run deep,” said Anna Verghese, executive director of The Audacious Project. “With fewer barriers, these interventions could drive major changes in the use of force, rebuild community trust and ultimately change the lives of millions across the country.”

CPE’s breakthrough is to change the definition of racism from what is most commonly defined as a defect of hearts and minds to a definition focused on behaviours.

CPE gathers and analyzes data on policing in order to shed light on disparities and the biases that may influence police behaviors. CPE partners with police departments to obtain data, tracking police stops, use of force data, and survey data. These data are combined with census and geospatial data to pinpoint and differentiate the portion of racial disparities police cannot control (e.g., poverty) from the portion they can (e.g., policies). This scientific analysis allows law enforcement to take informed steps to address bias.

“Data analysis provides a common language that empowers police and communities to trust a process, even when those involved often don’t trust each other,” Goff explains. “The outcome of that alignment is meaningful change: fewer stops and fewer people killed or injured by police.”