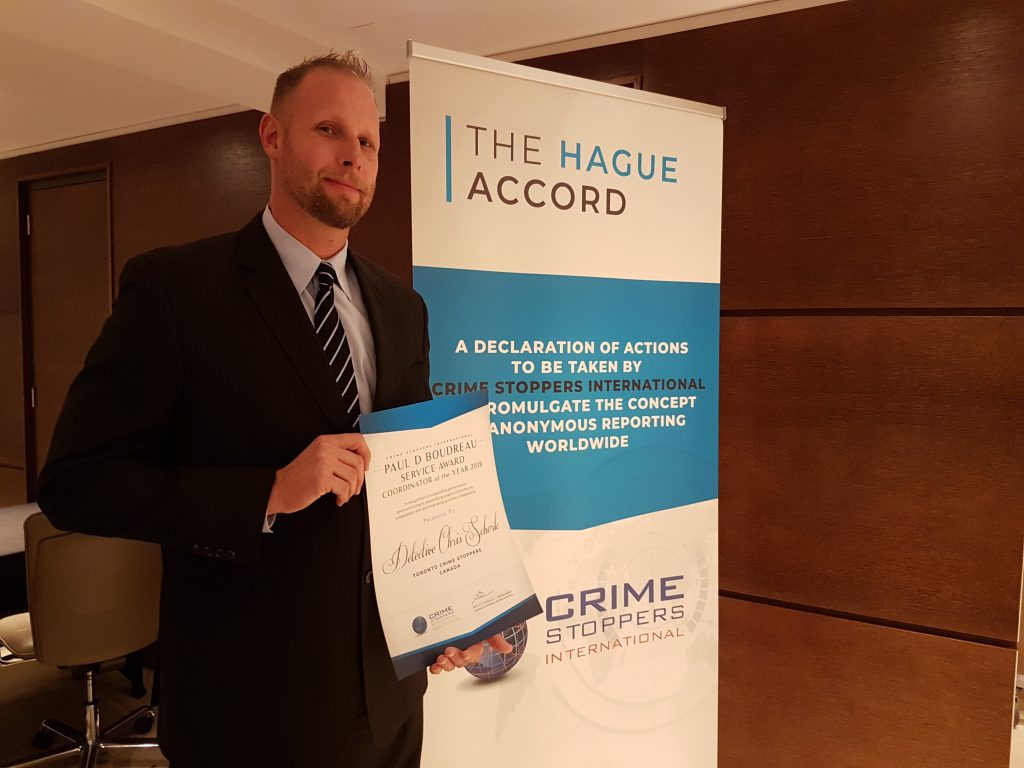 One specific award is the Paul D. Bourdreau Co-ordinator of the Year, which is given to a program co-ordinator for their outstanding performance and commitment, personifying a spirit of community cooperation and demonstrating qualities of leadership.

In front of an international audience of Crime Stoppers delegates and distinguished guests, Det. Chris Scherk received this prestigious accolade in The Hague, Netherlands on Oct. 31, 2018.

Since becoming the Toronto Crime Stoppers co-ordinator in December 2013, Chris’ leadership has accelerated Toronto’s program to new heights and increased our visibility within the Toronto Police Service (TPS) and most importantly within the community. A number of successful initiatives, special projects, community presentations and community events have significantly assisted in the solving of serious crimes by generating tips – at the helm of this all was Det. Scherk, who has played a vital role in revitalizing the true “grassroots” approach of our program.

Chris is well respected and well thought of by the Toronto Police Service, the Crime Stoppers community, corporate stakeholders and our media partners. But, most importantly because of his dedication Chris has enhanced the respect of the Crime Stoppers brand within the many communities across the City of Toronto. As Chris transitions into a new role within TPS as a road sergeant in 31 Division, his legacy of leadership and achievements has set the foundation for our incoming co-ordinator to succeed.

Sean Sportun is on the board of directors for the International Society of Crime Prevention Practitioners (ICPS) and is chair of Toronto Crime Stoppers.
Print this page