In a 4:1 opinion, B.C.’s highest court has ruled the mens rea component of breaching a recognizance of bail is objective. In other words, the Crown need not prove subjective intent to ground a conviction. 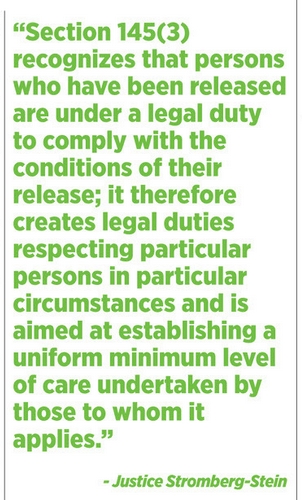 In R. v. Zora, 2019 BCCA 9, the accused, Zora, was released on a recognizance for a number of drug offences. As a result, he was required to obey an 8 p.m. curfew, including presenting himself at his front door within five minutes of a police officer or bail supervisor attending to confirm compliance with his conditions. Police had attended at the residence and Zora responded appropriately.
Then, on Thanksgiving weekend, a police officer attended Zora’s home at 10:30 p.m., rang the doorbell and knocked loudly, but there was no answer. Nor was there any activity at the home; there were no lights on and no dogs barking. Two days later another police officer went to Zora’s home. The officer noted a sign on the door that said, “use the doorbell.” The officer rang the doorbell, waited for more than five minutes but saw no activity. Zora was subsequently charged with two counts of breaching his curfew and two counts of failing to comply with the condition that he present himself at the door.
In B.C. Provincial Court, Zora, his mother and his girlfriend testified that they were at the residence over the Thanksgiving weekend and celebrated the holiday together. They said two dogs were usually at the residence and would bark when someone rang the doorbell or approached the residence.
Zora suggested that he may have been sleeping during the two police checks, claiming it was difficult, if not impossible, to hear the doorbell from where he slept. He explained that he was undergoing methadone treatment and withdrawal from his heroin addiction, which made him sleepy, so he often went to bed earlier than usual.

Consequently, Zora set up an audio/video system to help alert him to future police checks. He also changed where he slept in his home and had no further problems complying with his bail conditions.

The judge applied a standard of objective mens rea. He found it was not a defence to not answer the door because an accused person did not hear the doorbell and concluded that an accused ought to arrange their life in such a way as to comply with all bail conditions if they wanted the benefit of being released on bail. The judge concluded that, although Zora had provided a possible explanation for not appearing at the door, it was not a legal defence. He found Zora guilty of the two breaches for failing to appear at the door for the curfew compliance checks. Zora was sentenced to a fine of $400 for each breach. However, the judge acquitted Zora of the curfew violations because there was no direct evidence he was outside his residence during the compliance checks.

Zora appealed his convictions to B.C. Supreme Court suggesting the trial judge applied the wrong standard of fault for breaching bail under s. 145(3) of the Criminal Code. But the appeal judge upheld the convictions, applying an earlier decision of the B.C. Court of Appeal which found the mens rea for failing to comply with a recognizance was largely objective.

Zora again appealed, this time to B.C.’s highest court, which agreed to hear the case before a five-member panel of judges. The question for the Court of Appeal was whether s. 145(3) imports an objective standard of mens rea. Zora had argued that s. 145(3) was a true crime that presumes subjective mens rea and there was nothing in the provision’s wording supporting the application of an objective fault standard.

After reviewing case law and applying the rules of statutory interpretation, four judges concluded s. 145(3) was a duty-based offence that attracted an objective standard of mens rea. Justice Stromberg-Stein, speaking for the majority stated:

[T]he duty-based nature of s. 145(3), combined with the risk-based nature of bail provisions, support Parliament’s intention for the application of an objective fault standard. This is consistent with the plain language, context and purpose of the offence. An objective fault standard requires proof of a marked departure from what a reasonable person in the same situation would do. If there is a reasonable doubt that a reasonably prudent person would not have foreseen or appreciated the risk or could have done something to prevent the breach, an acquittal must follow. This is sufficient to ensure only the morally blameworthy will be convicted.  [para. 2]

Section 145(3) recognizes that persons who have been released are under a legal duty to comply with the conditions of their release; it therefore creates legal duties respecting particular persons in particular circumstances and is aimed at establishing a uniform minimum level of care undertaken by those to whom it applies. The duty imposed is a societal, and not a personal, standard of conduct. The section ensures that those granted judicial interim release by means of an undertaking or recognizance made to court will comply with the terms and conditions. This ensures proper functioning of the criminal justice system generally and the bail system specifically.

A review of the language, breadth, context and purpose of s. 145(3), as well as the gravity of the crime and social stigma attached, confirms the offence is duty-based, requiring objective mens rea to establish the fault element of the offence. [paras. 66-67]

Here, the trial judge found Zora’s “failure to present himself at his door for two curfew compliance checks demonstrates a marked departure from what a reasonable person would have done in the circumstances.” A “reasonably prudent person in the circumstances would have foreseen or appreciated the risk or could have done something to prevent the breach,” Stromberg-Stein said. “His explanation does not amount to a lawful excuse for the breaches.”

A second opinion
Justice Fenlon, writing a separate decision, agreed Zora’s appeal should be dismissed but for a different reason. She disagreed that the mental element for a s. 145(3) offence was objective. Instead, she was of the view that the provision imported a subjective fault standard.

“I see no basis in the context or language of s. 145(3) to displace the presumption of subjective intent,” Fenlon said. “It would follow that, to prove the mental element of breach of a bail condition, the Crown must prove that the accused person knew their conduct would infringe a condition of release, was reckless, or was wilfully blind. … [S]ubjective fault may be established where the accused intentionally commits the prohibited act, or does so recklessly with knowledge of the facts constituting the prohibited conduct, or is wilfully blind.”

Here, Fenlon concluded that Zora was reckless. Zora said he often went to bed early, slept heavily and was aware he could not hear someone at the front door when he was in his bedroom.

“In my view, an accused who is required by his bail conditions to appear at the door when police attend, knows that he will not hear them ring or knock if he is in certain parts of his residence, and makes no effort to address that situation, displays recklessness consistent with a guilty mind,” Fenlon said. “The problem Mr. Zora ignored was readily solved after he was charged with breach of the terms of his release: he began sleeping in a different bedroom and used a commonplace baby monitor.”

Zora’s appeal against conviction was dismissed.