Morley Lymburner, Blue Line's founder and former publisher, will be honoured with the Meritorious Service Decoration (M.S.M.) from the Governor General of Canada. 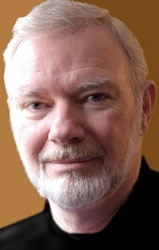 The Meritorious Service decoration (Civil Division) recognizes individuals who have performed an exceptional deed or activity for bringing honour to their community or to Canada. The activity or deed is often innovative, sets an example or model for others to follow, or improves the quality of life in a community and may benefit local, provincial, national, or international populations. The award is one of the highest distinctions an individual can receive.

“I am very honoured to have received this prestigious recognition,” Lymburner said after the Aug. 28 announcement. “It is an unfortunate part of a recognition such as this that a lot of the sacrifices made by family and staff can be quickly over-shadowed. Although the concept was mine I would be remiss if I did not recognize the huge contributions of my wife, Mary, two daughters and a dedicated staff that put the bricks and mortar to this dream.”

Lymburner initiated the concept of publishing a magazine specifically for Canadian law enforcement in 1988. Being a practicing police officer in Toronto, he envisioned a national publication that kept its readers up to date on news, strategies and concepts in policing.

Initially headquartered in Markham, the magazine moved to Whitchurch-Stouffville in 1994. In October 2016, it transferred to new ownership and moved to Toronto.

Seen as a game changer for Canadian law enforcement, Blue Line allowed police officers to seek out independent source material beneficial for their day-to-day work. Editorially Lymburner was credited with encouraging the concept of distance education, which allows officers on shift work or in remote areas to upgrade their skills. Today many colleges have taken up the initial challenge posed editorially by the magazine. He also regularly highlighted the importance of mental health in policing, a subject which many services and officers at one time avoided.

“There was no precedent for a magazine addressed specifically to police officers in Canada,” said former Peel Regional Chief of Police Robert Lunney in a December 2013 letter. “Up to that time we made do with a few hard-to-come-by American publications and the RCMP Gazette and Quarterly…. (Morley) read his market well, and soon the content was quoted as an authentic resource.”

Lymburner’s opinion pieces have “sometimes been controversial, often thought-provoking, usually on point,” commented former OPP Commissioner Chris Lewis. “Occasionally I totally disagreed with his position but his articles challenged me to consider those differing views and opinions, which made me a better leader and police officer.”

“Blue Line Magazine has been a constant presence in addressing relevant issues, no matter what our profession faces, with practical solutions that are provided… with great integrity and respect,” wrote former Hamilton Police Chief Glenn De Caire.

“Over the years Blue Line Magazine has been a source of information and inspiration,” said former Vancouver Chief of Police Jim Chu. “It is a journal that has chronicled every major development in tactics and equipment over the last quarter century.”

An award ceremony will be held at a later date at Rideau Hall in Ottawa.

Related
Sneak Peek: An advance look at the Blue Line Expo show floor
Burnout, data & illicit fentanyl… Blue Line Expo 2019 is the place to be
Register now for Blue Line Expo on May 3
How do you use UAVs in law enforcement? • Survey results