Blue Line is kicking off 2019 in party mode: there’s 30 big candles on our cake to celebrate this month! 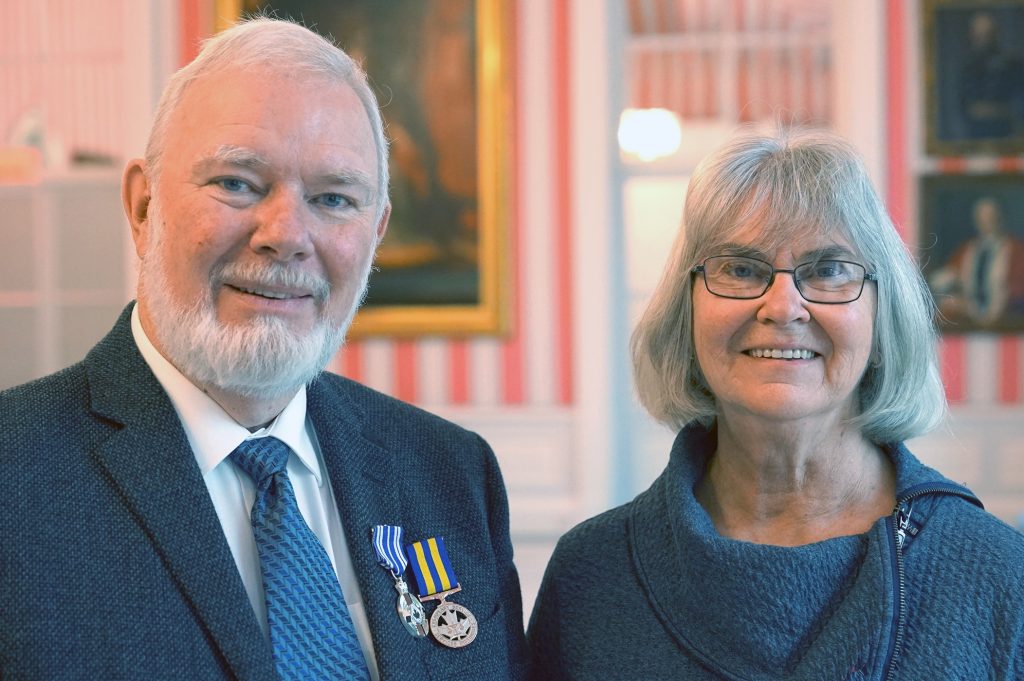 Morley and Mary Lymburner at the Meritorious Service Decoration ceremony in November 2018.

I took this opportunity to peruse the very first issue — the one featuring the beaming, white Plymouth on the cover with the CN Tower in the background (find it on page 14). Inside, there was news of a new video (a VHS video tape, of course) for in-service training, errors happening on the redesigned accident reports (anyone recall leaving blank spaces for the ministry microfilm number?) and numerous case law examples, among other features.

I especially love how Morley Lymburner, the magazine’s founder and former publisher, writes in that first editorial that Blue Line has no political preference or leaning towards management/staff; it simply seeks to keep law enforcement on the “leading edge” and is designed “in a manner that will encourage you in your chosen profession.” I believe the publication has stayed true to that for all of its 30 years and I will see that it continues to.

Last November, I finally had the honour of meeting Morley and his wife Mary, who was also extremely instrumental to Blue Line’s growth and success. They graciously invited me into their Stouffville, Ont. home, where Blue Line was born.

I stayed well past the one hour I’d assumed would be enough time, too enthralled in Morley’s stories from the frontline and then from the first few months running the magazine, when the couple were mailing it out themselves — sorting postal codes and bagging the issue right there at the local post office.

We huddled around the island in the basement where the magic once happened via cutting and pasting, assembling the pieces of each page onto an art board like a puzzle, and then using a hand-held “wax machine” tool (which they still had in a drawer!).

“It was a time of floppy disks and faxing,” Mary said. “Everything was faxed. Can you imagine doing sales over fax now?”

It points to the many changes Blue Line has navigated and adapted to — not just in the policing industry but also in the publishing field. That is no easy feat and I commend all former staff for seamlessly sliding the magazine along in its journey to digitalization, the online world, the social media realm and more. Next up? Podcasting! Our first episode is available to stream now on SoundCloud (blueline.ca/podcasts).

Morley, who had been in newspapers in Wiarton, Ont. before becoming a Toronto Police officer, was also the creator of the monthly newsletter, The Police Informant, for his district in the ‘80s. Toronto Police loved the publication so much, they wanted to see it spread city-wide, he said. One thing led to another and the entire Canadian law enforcement community was presented with the independent Blue Line instead.

“We started getting more of a demand with our third or fourth issue,” Morley said. “We thought we’d just do it for Ontario but then the Canadian Police Association received it and shipped it out. It just exploded from there.”

He originally thought it would be a decent endeavour for when he retired. It turned out to be so much more and Morley was recently honoured with the Meritorious Service Decoration (M.S.M.) from the Governor General of Canada.

I am so proud of Blue Line’s history and, as Morley said in the 25th anniversary issue, we will continue to “cast the light;” we don’t want anyone in law enforcement kept in the dark.

Related
Curbing gun violence
Against the grain: Why are you only hearing what you want to?
The mental health impacts of training and decision-making
Building resiliency & more at Blue Line Expo 2018