WINNER OF THE BEST DRESSED POLICE VEHICLE IN CANADA - 2017

The Barrie Police Service has been in existence since 1853 and enjoys the distinction of being the second oldest active police service in the province of Ontario.


The City of Barrie is located in the centre of southern Ontario, approximately 90 km (56 mi) north of Toronto. It is situated on the west side of Kempenfelt Bay which is on the western shores of Lake Simcoe.


During the war of 1812, British naval forces had a supply depot in the area where Barrie is now located. The city was strategically located near the Nine Mile Portage, an aboriginal transportation route that existed centuries before Europeans came to Simcoe County. The portage linked Kempenfelt Bay to Willow Creek and then the Nottawasaga River which flows westward to Georgian Bay and Lake Huron. The city was named Barrie in 1833 after Sir Robert Barrie who was in charge of British naval forces in Canada at the time.


More recently, in the last forty years the population has grown by over 560% to about 143,000 residents which is expected to grow further to 210,000 by the year 2031. The city is ideally located for those looking for year-round recreational activities, and is an excellent place to raise a family or operate a business. The city’s boundaries may soon extend towards the south, with plans to annex lands located adjacent to the south end of Barrie.

Prior to the arrival of cars, motorcycles and radios, officers walked the downtown core, and once electricity was commonplace, they had to rely on red lights atop hydro poles to notify them that their services were required. With the arrival of the patrol car and the two-way radio, a new style of policing came to the community.

Modern police services have now realized that they cannot succeed in meeting the needs of the community without the help of their citizens. Most Ontario police services have all adopted the ‘Community Based or Contemporary policing’ concept. Community policing is a balance between community involvement with policing strategies and the retention of the ability to respond quickly and effectively in emergencies. The backbone of community policing is the partnership between the community and the police.

Officers of the Barrie Police Service are proud of the number of partnerships that have been formed within their community; partnerships which have enhanced their ability to provide responsive and effective service. Today's Barrie Police Service is committed to providing accountable, responsive, and cost efficient policing services to the citizens of Barrie. We have grown from one County Constable to a modern police service of over 237 sworn officers and 105 full-time civilian members.

Between 2014 and 2016 the Barrie Police Service embarked on the rebranding of its organizational image. Our senior management team felt that a consistent approach to our corporate image would establish a new visual persona that would better reflect our professionalism, define our vision and provide guidelines for the consistent use of our corporate logo. This initiative was part of the 2014-2016 Strategic Business Plan and mirrors the goals and objectives by “Delivering Quality Service and Promoting Organizational Sustainability.”

The revitalization of our visual and corporate identity touches every facet of police work and compliments our Mission, Vision and Values. This in turn is a direct reflection of our leadership and professionalism coupled with our commitment to our community.

As part of the rebranding process an internal survey specific to our vehicle design was conducted with the Bateman Design Group in January 2015. The survey presented three graphical design options for our police vehicles which complimented our branding initiative. The majority of the respondents canvassed during the internal survey agreed on the design which was the final choice.

While the presence of the white and red striping denotes the commonality with other police services, the bold use of a Jazz Blue Pearl colour was purposeful in focusing on Barrie’s geographical location and image as one of Canada’s premier waterfront communities. The new look also sought to harness the known qualities associated with the colour: trust, dignity, intelligence and authority.

In addition to the new graphical design, the following safety enhancements are included with our new 2016 police vehicles:

To compliment the vehicles’ safety features the Barrie Police Service sought to improve the vehicles’ efficiency and performance. All of our new vehicles are equipped with the performance Mopar Air Intake System which replaces the standard paper air filter that required quarterly replacement at a cost of $50.00 each.

The Mopar Air Intake System filters are readily cleaned during regular service intervals and reused for the life of the vehicle. The system costs approximately $350.00 and with some vehicles lasting as long as 6 years the Service saves an additional $800.00 per vehicle by using the system.

When the vehicle is retired, the original intake system is reinstalled and the Mopar Air Intake System can be installed in a new vehicle which can translate into another $1,200.00 in savings. Additionally, when being driven under normal conditions the Mopar system reduces fuel consumption and when needed it provides the vehicle a 14% increase in horse power.

The decisions for all these safety and efficiency improvements were made by our fleet manager, Kevin Harrison. They will enhance officer safety and provide future cost saving for the fleet.

As the award recipients for the Best Dressed Police Vehicle for 2017 we are very proud of our vehicle redesign. We believe our vehicles possess a look and style that reflects our community and the policing functionality that is required in today’s changing environment. Due to the added efforts in the areas of lighting, fuel economy and environmental concerns we believe that this initiative clearly illustrates that our service is being sensitive to the numerous issues within policing while remaining fiscally responsible and environmentally conscious at the same time.


Sergeant Robert Gravel is a 26-year member of the Barrie Police Service. He currently works in the Corporate Services – Planning and Research section. He can be reached at: rgravel@barriepolice.ca 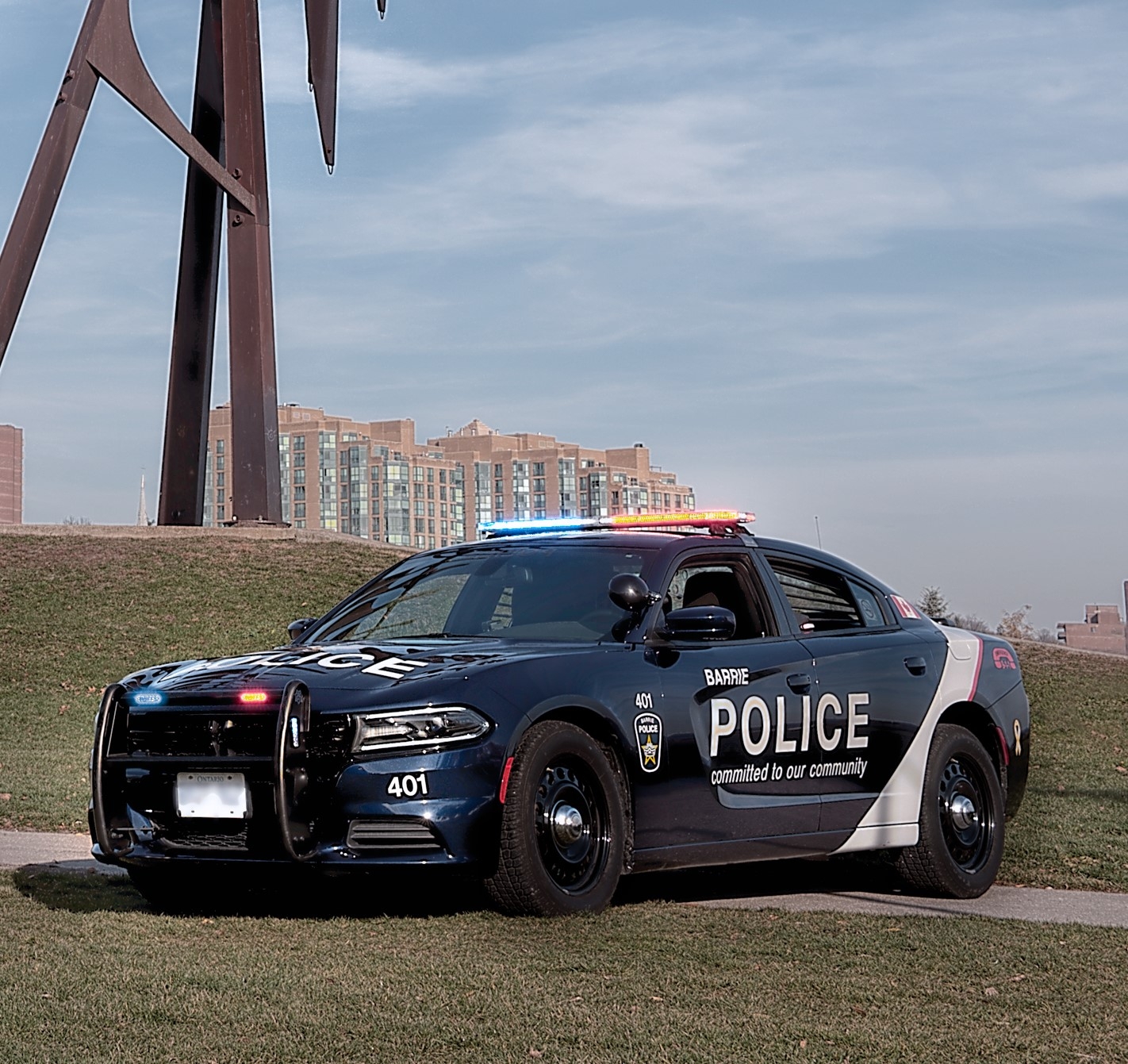 Related
Harnessing the power of group buying
Debriefings – Are they Helpful?
25 Years of Blue Line Magazine
Welcome to the light