Halifax Regional Police Staff Sgt. Carolyn Nichols, the president of AWLE (Atlantic Women in Law Enforcement), sat down with Blue Line on her third night shift as watch commander, when magazine staff were in town for the CACP (Canadian Association of Chiefs of Police) Conference earlier this year. Nichols, who is a third-generation police officer, began her policing career in 1999 and was promoted to her current rank this past July. She shares her journey and why organizations like AWLE matter. 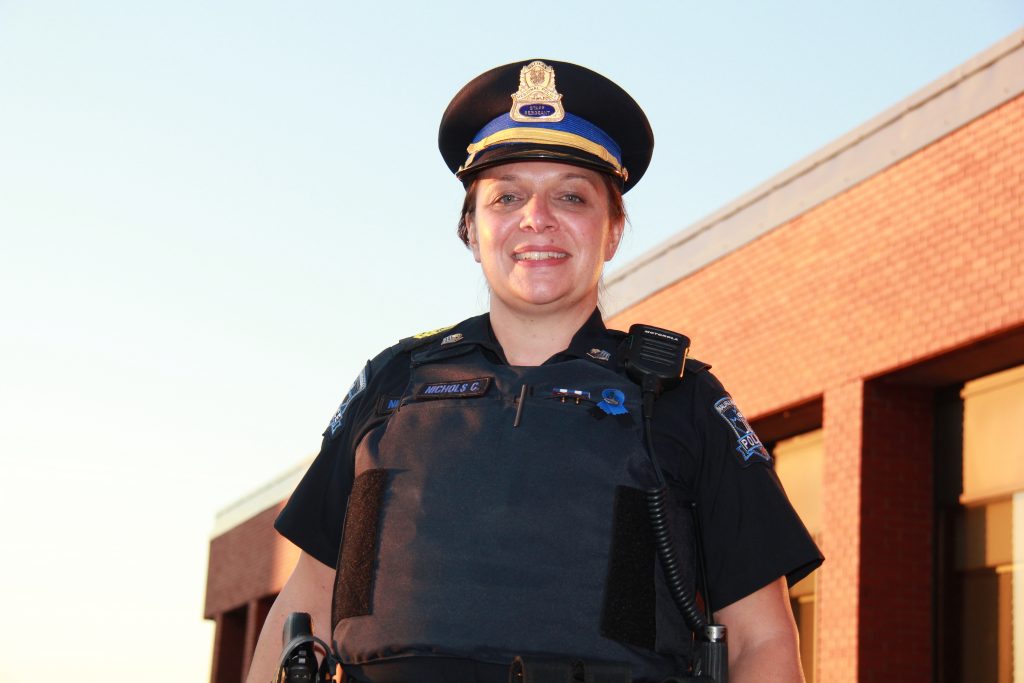 Q: Your grandfather and aunt were both police officers. Did you always dream of law enforcement as a career?
For me, it’s true, it seemed like a family business. My grandfather, Al Nichols, was a sergeant with the former Dartmouth Police Department and he was instrumental in getting his daughter, Judy McPhee, my aunt, hired back in the 1980s when they were talking about getting women involved in the department.

I’d been at Dalhousie University and I was at the point where I had to declare a major. I really couldn’t decide. I’d thought about policing; it was constantly at the back of my mind. I’d married a Canadian Armed Forces member and he always tells the story of how he went on deployment in the Middle East for six months and the first night he was back, I said to him, “I’m going to be a police officer.” I’d finally decided I was just going to do it, and my husband really encouraged me.

My aunt presented my badge at the police academy… I’m the second generation of female police officers in my family – not many can say that – and it was so meaningful to be able to work with her for a few years before she retired.

Q: Why become involved in AWLE?
My aunt had been involved when they were first creating it – AWLE is now in its 26th year. My aunt is a very direct lady and she said to me, “You will be involved in AWLE,” so of course I joined. My first AWLE conference was in Halifax the year after I was hired. Back then, when you went to fall-in, you were the only woman there. And I didn’t mind that; I knew that would be the case when I signed up. But when I went to that first conference… here was a huge group of female officers from all different kinds of agencies. You could network and make friends, and it had a huge impact on me. I knew right then that this was something I would continue to commit to. I’ve been to every conference since, minus one. The women on the executive then, who I looked up to and continue to look up to, are in major roles now: Julia Cecchetto, Chief of Police at Kentville Police Service and Chief Leanne Fitch with Fredericton.

My main goal when I became AWLE president in 2015 was to heighten our profile. People had heard of us, but we didn’t have huge numbers of women who were attending the annual conference. We were struggling for membership.

I talked with the media contact here at Halifax Regional and I learned we had to get on Twitter. Making that move was probably the best thing I have ever done for this organization. I was able to connect with agencies across Atlantic Canada and promote our awards, which have evolved over the years (for example, we now give out awards to male partners). I go to the police academy to hand out our top female cadet award and I talk about AWLE every chance I get. I’m happy to say we have now tripled our membership.

Q: What is your most memorable moment so far?
One of my proudest moments is probably also one of my most challenging. Before I came into policing, I was heavily into scuba diving. I was always in the water. I grew up on Porter’s Lake and my mom could never find me because I was always under some dock.

When I joined Halifax Regional, they didn’t have a dive team, but in 2004 they integrated an underwater recovery team with the RCMP and I knew I’d like to be a police diver. I was and remain the only woman who has ever applied to the dive team. When I earned my spot – completing the testing just months after giving birth – that was definitely my proudest moment.

I’m also the first Staff Sgt. Nichols in the family, so that of course has been very memorable as well.

Q: It’s no secret there are few women in the upper ranks, though that is changing. What, in your opinion, needs to happen to improve those numbers?
Women bring something different to the table. Our skillsets are based on our life experience and women experience life differently than men. No two people think the same and we need that in policing. That’s how we connect with people in the community, how we find solutions.

When a new job comes up and 10 things are listed that the applicant should have, a woman will look at that and say, “I have eight of those; I’ll go get the other two and come back and apply.”

Men look at that and say, “I’ve got two out of 10 of those. I’m applying!” I talk about this because I want my daughter to always just go for it.

How to gain that confidence is something I’m consistently thinking of when we plan our conference. One of the answers is: seeing is believing. We just had our first female chief in all of Nova Scotia appointed this year. Women are watching and believing they can do it too.

I vividly remember when the first woman was named a member of senior management here at Halifax Regional and received her white shirt. That was Supt. Colleen Kelly in 2009 – who was also the first female officer in Canada to assume the position of team leader for the explosive disposal unit in 2004. We need more of this visibility and championing this visibility.

Q: What is your hope for the future?
I would like to see more diversity of thought. I’d like to see more young women looking at law enforcement as a career, knowing it’s available to them, because I think if you haven’t grown up in a family where you’ve seen women in policing roles, you’re still not thinking of it as a job for you.

I’d also like to see AWLE become even more inclusive with more male members… We need male mentors as much as we need female mentors.

Find more on Atlantic Women in Law Enforcement at www.awle.org.

Related
The sun never sets on Canadian Military Police
Stronger together: An integrated approach
Trust, face time — it does matter
A common theme: Navigating the crisis in the negotiation