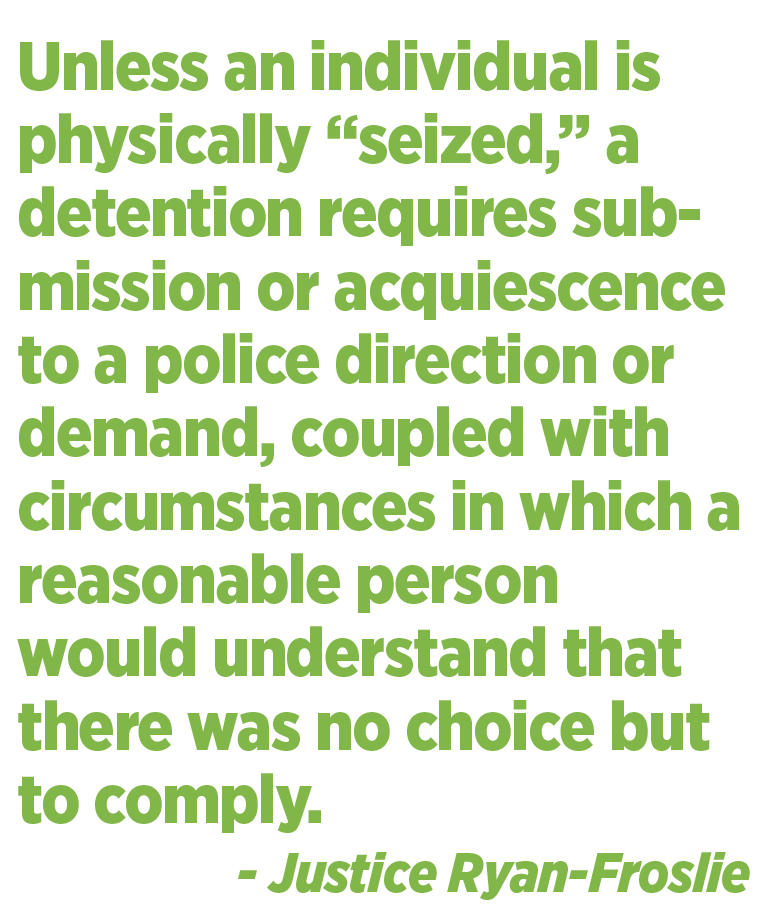 Unless a police interaction constitutionally amounts to a “detention,” there is no need to determine its arbitrariness nor a requirement for police to provide a reason for it.

In R. v. Ratt, 2020 SKCA 19, two police officers saw a group of people fighting at a street corner. The officers went to investigate and saw a man flee as they arrived on scene. One of the officers yelled at the fleeing man to “stop” and that he was “under arrest.” The officer pursued the man and found him hiding behind a propane tank. The officer recognized the man as the accused, a probationer who was not permitted to be within 25 kilometres of the location where he was found.

Ratt was arrested for breaching his probation order. While being escorted to the police vehicle, he allegedly threatened both officers. Ratt was advised of his right to silence and his right to counsel once he was placed in the police vehicle. He was subsequently charged with breaching his probation, resisting a peace officer in the lawful execution of his duty “by fleeing arrest” and two counts of uttering threats to cause bodily harm.

A Saskatchewan Provincial Court judge concluded Ratt’s s. 9 and s. 10(a) Charter rights had been breached. The judge found Ratt had been unlawfully detained when police yelled at him to “stop” and that he was “under arrest.” In her view, the officers did not have the necessary reasonable grounds to arrest under s. 495(1) of the Criminal Code. They were acting on a “mere suspicion” since they did not see Ratt committing an indictable offence. Nor did they have reasonable grounds to believe he had committed one. Since there was no authority to arrest Ratt, his detention was arbitrary.

Ratt was also not promptly advised of the reason for his arrest at this time. Thus, his s. 10(a) right had been violated as well. All of the evidence pertaining to events that occurred thereafter — his identification, the probation breach, his resisting arrest and his uttering threats – was excluded under s. 24(2) and Ratt was effectively acquitted, having had the charges dismissed by the judge. The judge, however, did not determine whether Ratt’s s. 10(b) right to counsel had been breached.

The Crown then argued before the Saskatchewan Court of Appeal, among other things, that the trial judge erred in holding that Ratt was actually “detained” under the Charter when the officer yelled at him to “stop” and that he was “under arrest.” Since he had not actually been detained at this moment, the Crown contended that s. 9 and s. 10 were not triggered.

Ratt, on the other hand, submitted that the trial judge properly found he was detained when the officers yelled at him, even though the detention was only momentary and fleeting.

Detention, arrest or neither?

Justice Ryan-Froslie, delivering the opinion for the unanimous appeal court, first reviewed the “subtle, though distinct, difference between effecting an arrest and a detention”:

An arrest can only occur if (i) there is an actual seizure or touching of a person’s body with a view to detention; or (ii) in the absence of a seizure or touching, the person submits to the process of arrest. Merely stating “you’re under arrest” is not sufficient to effect an arrest unless the person submits to the process and goes with the arresting officer.

On the other hand, where a peace officer makes a demand or gives a direction to a person, that person is detained “where he or she ‘submits or acquiesces in the deprivation of liberty and reasonably believes that the choice to do otherwise does not exist’.” [references omitted, paras. 21-22]

In this case, Ryan-Froslie concluded there was no arrest. The officers never “seized” or touched Ratt, nor did he submit to arrest, before he was found behind the propane tank.

As for a detention, there was not one in this case. First, there was no physical restraint. Second, although the officer’s command to “stop” because he was “under arrest” was a police demand, Ratt “did not submit or acquiesce — even briefly — to the peace officer’s commands.” Here, Ratt was already running away when the officers got out of their police vehicle and issued commands at him. Since he did not submit or acquiesce to these demands, there was no detention. Without a detention, there was no need to proceed to the second stage of analysis — determining arbitrariness.

“Before there can be an arbitrary detention within the meaning of s. 9 of the Charter, there must first be a detention,” said Ryan-Froslie. “An attempted detention is not a detention for the purposes of s. 9.”

Since a violation of both s. 9 and s. 10(a) Charter rights depended upon a proper determination of detention, which the trial judge erred in finding, the Crown’s appeal was allowed, Ratt’s acquittal on the charges was set aside, and a new trial was ordered.