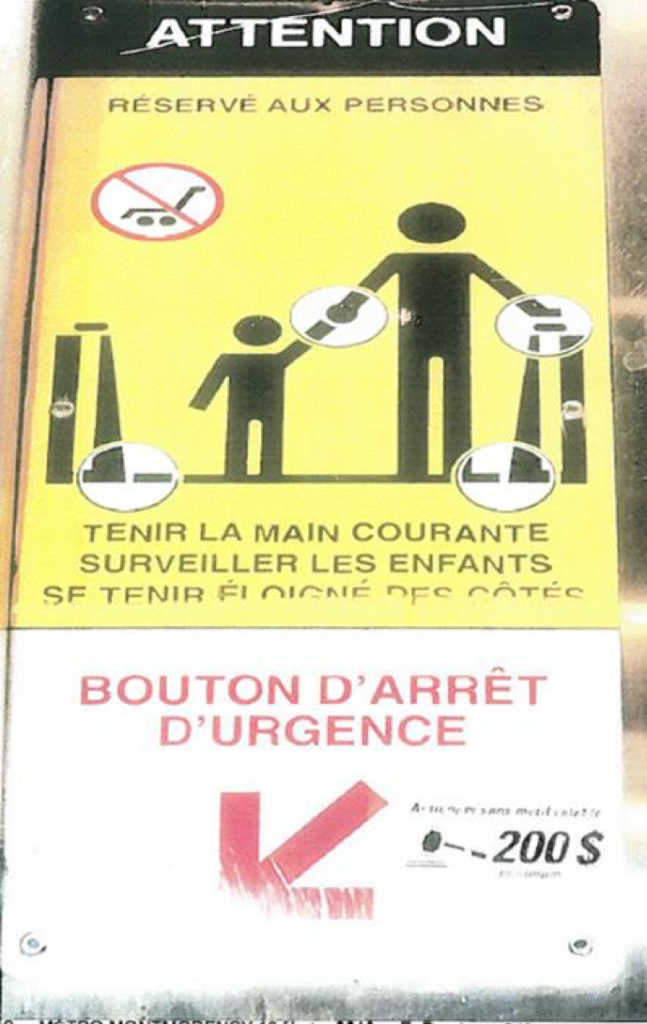 An appendix attached to the judgement. Photo submitted by columnist.

A 38-year old woman who was arrested by a police officer after she refused to identify herself when the officer saw her not holding the handrail of an escalator at a Quebec subway station has been awarded $20,0000 in damages plus court costs.

In Kosoian v. Société de transport de Montréal, 2019 SCC 59, the court heard how Ms. Kosoian was leaning forward and rummaging through her bag as she descended an escalator at a Laval subway station. She was not holding the escalator’s handrail, despite a pictogram indicating that the handrail should be held. A police officer saw her, approached her and said, “Careful, you might fall. It’s dangerous. You should hold the handrail.”

Kosoian refused to hold the handrail and a heated exchange occurred. The officer ordered her several times to hold the handrail but she refused to comply. When she reached the bottom of the escalator, she refused to accompany the officer to a room so he could ticket her and she tried to walk away. She was physically escorted to a holding room where she refused to provide identification. She was handcuffed, forced to sit in a chair and her bag was searched. She was subsequently identified and ticketed for disobeying a pictogram and hindering police in their duties.

Kosoian was acquitted of the offences in a Quebec Municipal Court because the judge concluded he was not satisfied beyond a reasonable doubt that there was an obligation to obey the pictogram.

Kosoian then brought a civil liability action against the police officer who arrested her, the city who employed him (Laval), and the authority responsible for the subway system (Société de transport de Montréal). She argued that her arrest was unlawful and unreasonable, and it constituted a fault under Quebec civil law. In her view, holding the handrail was not an obligation under a by‑law, but simply a warning, and a reasonable police officer in the same circumstances would not have acted as the arresting officer did. She claimed to suffer significant psychological stress and humiliation and sought $69,000 in compensatory and punitive damages.

In the Court of Quebec, Kosoian’s arguments were rejected and her civil liability action was dismissed. In the judge’s view, the rules were clear and their implementation was beyond reproach. Further, the officer’s actions were exemplary and irreproachable. Kosoian was not unlawfully detained and the officer’s conduct was entirely justified. She was the author of her own misfortune by refusing to comply with the officer’s order and not holding the escalator’s handrail.

The plaintiff appealed to Quebec’s top court. In a split decision, the Quebec Court of Appeal rejected her submissions. A two-member majority ruled that the officer did not commit a civil fault by ticketing and arresting her when she refused to identify herself. The majority opined that failing to hold the handrail was a bylaw offence, which was presumed valid. The officer had been trained that holding the handrail was an obligation under a bylaw and he acted as a reasonable police officer would have done under the same circumstances.

A dissenting judge, however, found there was no obligation imposed under a bylaw that required a person to comply with the pictogram and hold the handrail. First, the pictogram had not been approved by the city, a requirement for making a bylaw offence. Second, the pictogram only communicated a warning to hold the handrail, not a directive to do so.
The dissenting judge would have awarded Kosoian $20,000, but reduced it to $15,000 after finding she was 25 per cent at fault for aggravating the situation by failing to co-operate with police. The $15,000 was to be paid by the subway authority because it drafted the bylaw, trained the police officers and prosecuted Kosoian.

Kosoian then appealed to Canada’s highest court. In a unanimous judgment delivered by Justice Côté, the Supreme Court of Canada found the bylaw did not create an offence for not holding the handrail. The pictogram was only a warning to hold the handrail and communicated advice to be careful. It did not impose an obligation to do so. The officer unreasonably believed in the existence of an offence that did not exist in law. Since there was no legal basis for the actions taken by the officer, his conduct was unlawful.

“In short, a reasonable police officer in the same circumstances would necessarily have doubted the existence in law of the offence and, as a result, would not have required Ms. Kosoian to identify herself so that she could be given a statement of offence,” Côté said. “Such an officer would certainly not have arrested her if she refused, but would instead have allowed her to continue on her way. I therefore conclude that [the officer] departed from the conduct expected of a reasonable police officer by grabbing Ms. Kosoian in order to prevent her from leaving and by taking her to the holding room. By acting in that manner, he made an arrest which was unlawful … and which, having regard to the context, constituted a civil fault.”

In its judgment, the Supreme Court considered the obligation of police officers to know and understand the law. In doing so, Justice Côté made the following comments:

As for apportioning liability, Côté found the subway authority, the City of Laval, and the police officer all liable.

The subway authority was at fault as the officer’s mandator by designating the officer as a transit inspector, and for implementing the bylaw and teaching police officers the pictogram imposed an obligation to hold the handrail.

The City of Laval was liable as the police officer’s employer. However, since Kosoian had no legal obligation to hold the handrail and was entitled to refuse to obey an unlawful order, no apportionment of liability was imposed on her.

Kosoian’s appeal was allowed, the Quebec Court of Appeal’s judgment was set aside, and the award of $20,000 in damages set by the dissenting judge in the Court of Appeal was assessed, 50 per cent apportioned to the subway authority and 50 per cent to the officer involved.