It might seem like a smooth sailing job with plenty of sunshine and splashing around, but a day in the life of a marine unit police officer is just as demanding as those patrolling the highways — it’s simply a different dynamic, as we found out during our wet ride-along with Barrie Police Service’s marine team. 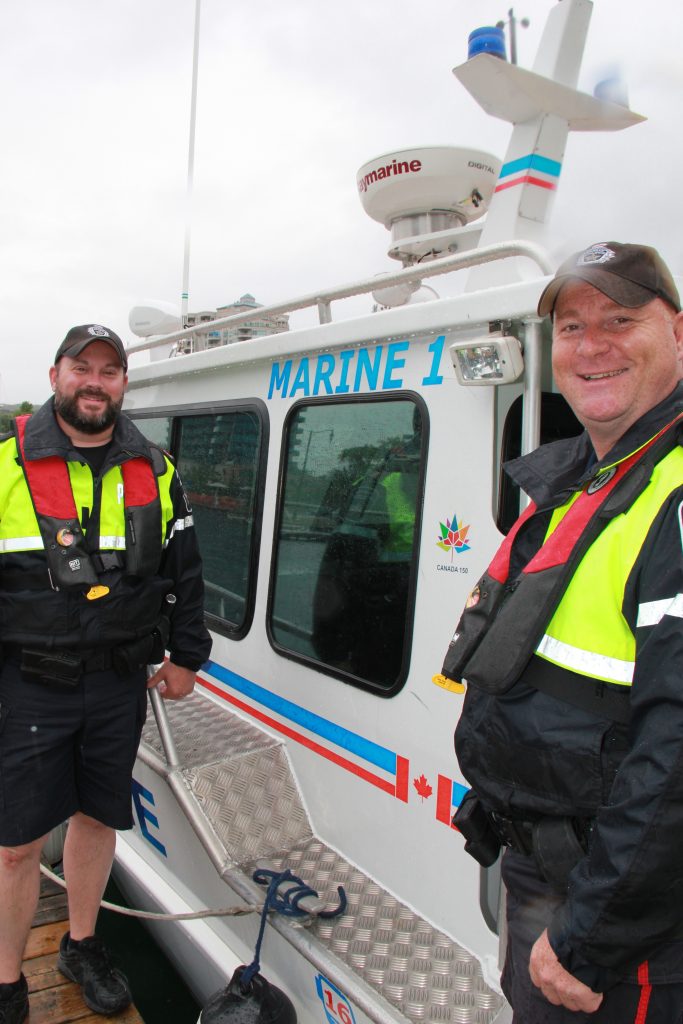 (Of course, the morning we scheduled to shadow these officers turned out to be a rainy one, meaning summer traffic wasn’t what it typically is. And no, for the record, there is no blender on board for tropical smoothie making.)

When a police car pulls up outside a house, apprehension typically follows, says Const. Paul Matte, who safeguards Barrie Police’s designated 20 square kilometres of the Kempenfelt Bay area. That doesn’t happen with a police vessel.

“People wave us over as we pass by. Kids come up to us when we dock and we hand out stickers, have throw-aways. We get invited in,” Matte says. “The marine community here is close knit and you know everyone, even if you don’t know all their names. It’s a friendly world and people are glad to help.”

That ease takes the partnership required for community policing to an almost supreme level on the water.

“You rely on the public more on the water,” explains Const. Doug Bosch, Matte’s marine partner since 2009. “You might be the only law enforcement guys on the water and need help quick. So who are you going to look to? The public. And they do step up.”

The Barrie Yacht Club has told the team to feel free to use its docks for emergencies — it’s closer to the hospital on the northern side of the bay. Another cottage owner had also previously given the marine unit permission to use his boathouse for shelter if ever needed.
As we drift along Chicken Bay, Matte points to a pile of rocks snaking out from shore where a woman plowed her Sea-Doo into last summer. If it wasn’t for a boat dweller, he says, she could have lost her life.

“There was one boat at that nearby dock for the night and someone was on board sleeping and heard the crash. They ran out and kept her head above water so she wouldn’t drown,” Bosch says. “Paul was on call at that time — the marine unit was only part-time then — and had to run over here, get on the boat and get here with the paramedics.”

The unit does have a “slightly higher level of first aid training” due to the extensive amount of first aid equipment on board, including backboards, he adds.

“It’s tough. You have one operating the vessel and the other guy is doing everything else,” Bosch says. “A gentleman had a heart attack and he wasn’t breathing, he was gone, but Paul brought him back with CPR on this dock, right over there… It’s not easy when the waves are rough. Everything is different on the boat, compared to these situations on land. And then you have to find your casualty transfer points. You have to get to a dock and co-ordinate with the ambulance. In the summer, the beaches are packed and the ambulance can have a hard time getting close to us. It all takes time.”

Additionally, education is a heavy component to their role.

“You’re an ambassador,” says Bosch, who has been on the marine unit since the 90s.

“A floating billboard for safety,” adds Matte. “People always have questions. And if you can be proactive, you can minimize the amount of enforcement — maximizing safety.”

Prevalent issues with boaters include alcohol, towing without a spotter and having all the required  safety equipment. They also find a lot of illegal markers they have to cut.

The downside? It’s hard to track and measure how successful the marine unit is because there aren’t a huge number of tickets handed out. That complicates the budget.

“We’re not out to trick anyone. We’re big on prevention and providing information to people on what they should have on board for safety,” Bosch says, noting issuing speeding fines is challenging.

(We turn on the blue lights and pull over the lone ministry boat out during the rainstorm to check for proper safety equipment. Even with this holdup in foul weather, the boaters are friendly and make small talk with Bosch, and you can see the relaxed and reciprocal relationship with police the marine unit talks of.)

The Barrie unit boasts two boats (a custom, 27-foot aluminum Stanley vessel from Connor Industries in Parry Sound, Ont., and a Zodiac) and four full-time officers, trimmed from six prior to 2013 to save costs.

“Anything in marine is expensive,” Bosch says with a laugh. “We say boat stands for ‘break out another thousand.’”

It was all hands on deck recently for the team, as Barrie launched into its Canada 150  celebrations with the Illuminate Barrie Kickoff Air Show. Eleven boats from four different units were patrolling the bay and Barrie firefighting and paramedic staff was also on the two Barrie police boats, according to Sgt. Ian Hughes, adding that the dive team was strategically placed throughout the zone, too.
“We shut down the bay around 4 p.m. and I was a bit nervous at the time in regards to getting the three-mile area cleared… There were about 100 boats to get off the water,” Hughes says. “But we had it taken care of in about 20 minutes and 200-300 boaters probably watched the show from the sidelines.”

Whatever the water brings, it’s never a predictable day, Matte and Bosch say, and could include checking in on scuba divers, managing traffic during boating races, keeping keys and phones away from Matte (he has a tendency to drop them into the lake) or climbing the roof of the wheelhouse to put out a fire on a burning pyre-like structure set adrift (yes this happened and thankfully was not a Viking-type funeral pyre).

“The water is an awesome place to have fun but it can also be a very dangerous place,” Matte concludes. “That’s where we — and the education we can provide —come in.”