Features
A year of firsts and lasts: Results from the Michigan State Police vehicle tests 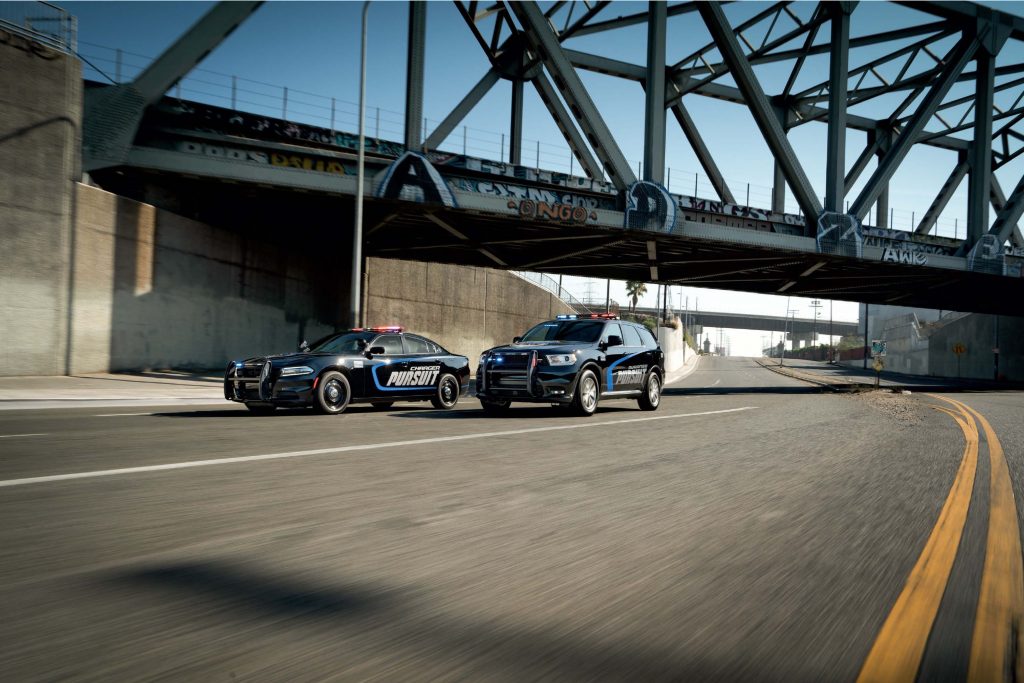 The day after Ford announced that the 2020 Ford Police Interceptor Utility was now the fastest pursuit-rated police car in North America, social media lit up with comments about how, “they still can’t catch my BMW/Corvette/Ferrari/Tesla/super-turbocharged Civic … etc.”

These types of comments all miss the point. Top speed may be one of the least important factors in choosing a modern police vehicle. Actual pursuits are only a small part of their purpose. They also have to be a comfortable and safe workplace for one or two officers for up to 12 hours at a time.

Model year 2020 is indeed a year of both firsts and lasts for Ford: the first pursuit-rated SUV hybrid; the first year a combined gas/electric hybrid drivetrain is standard in both the Ford Sedan and the Ford Utility; the last of the Ford sedans.

In 2019, Ford stopped selling the Ford Taurus, which was the base for the Ford Police Interceptor Sedan. Now called the Police Responder Hybrid, the sedan continues for 2020 but only in a front-wheel-drive, 188-horsepower hybrid version. A version of the Ford Taurus is still being built by a joint venture between Ford and Chongqing Changan Automobile of China, and the Chinese Taurus just received a body redesign and a new 2.0-litre hybrid engine, so there is some speculation that Ford may import a version from China for the police market in North America.

Or perhaps the sedan may just disappear after 2020. In the United States, police SUVs have been out-selling sedans by almost five to one in recent years. In 2018 for example, Ford sold just over 7000 police sedans and almost 34,000 police SUVs in the U.S. They are still popular in urban areas, but with the only choice in Ford being a relatively slow front-wheel-drive sedan, the only option for police agencies in North America may be Dodge.

While all the following vehicles are advertised as “pursuit-rated,” there is no specific definition of the term, but Michigan State Police (MSP) and Los Angeles County Sheriff’s Department document and test every police model offered for sale in North America, and both agree that police category vehicles should be designed for the full spectrum of police work, including pursuits.

Traditionally, a pursuit capable vehicle must be able to reach 60 mph in nine seconds, 100 MPH in 24.6 seconds, complete all 32 laps of the dynamic testing without major component failure, and maintain an average deceleration rate of 25.79 feet/sec2 while performing 20 threshold braking stops from 60 mph. As always, it will be up to the individual agencies to determine if a particular vehicle is suitable for their mission.

Also, as far as pursuing and catching plug-in electrics like a Tesla… there is nothing to worry about. Four minutes at top speed and its batteries are pretty much depleted.

As for the BMWs and Ferraris of the world… well, radio waves still travel at 186,000 miles per second. 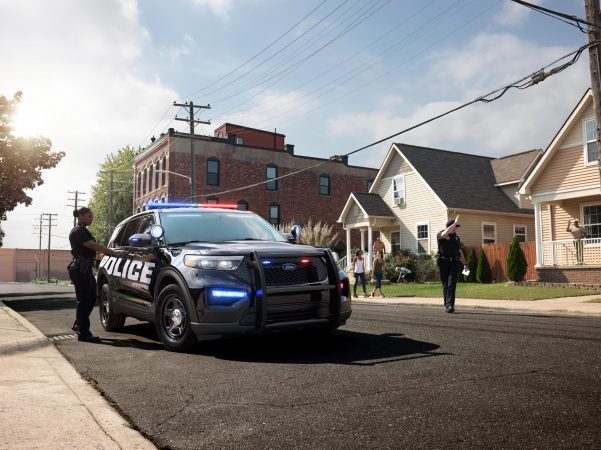 Every fall MSP, in conjunction with the U.S. National Institute of Justice (NIJ), test the handling and performance of every new police vehicle on the market. These eagerly anticipated tests are seen as the most comprehensive analysis of police vehicles in North America. 2020 will mark the 22nd year Blue Line has reported the results.

Thirteen vehicles were submitted to the NIJ in the police category for the 2020 (and early 2021) model years:

These are the police category vehicles that will be available for sale in Canada for 2020 and early 2021 (with figures from the 2020 Michigan State Police vehicle tests, and additional comments from Blue Line.)

Acceleration, braking and top speed tests are performed at the Chrysler proving ground and vehicle dynamics tests are done using the two-mile road course at the Grattan Raceway. (All dimensions and measurements are given in U.S. numbers.)

The objective of the vehicle dynamics testing is to determine the high-speed pursuit handling characteristics. Except for the absence of traffic, the two-mile road course simulates actual pursuit conditions. It evaluates the blend of suspension components and acceleration and braking ability. 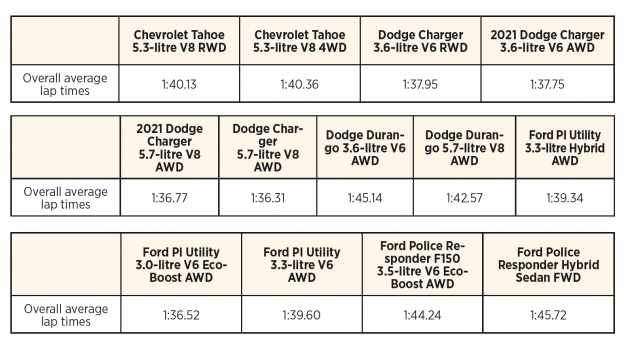 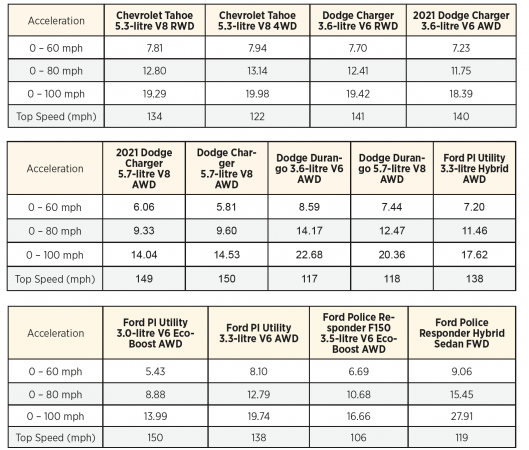 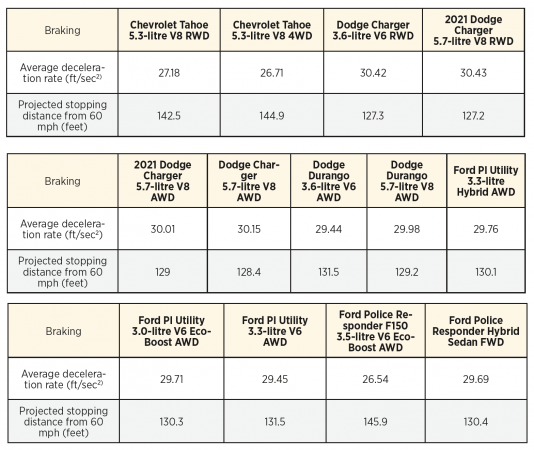 The objectives of the communications and ergonomics tests are to rate a vehicle’s ability to provide a suitable environment for patrol officers to perform their job, to accommodate required communication and emergency warning equipment and to assess the relative difficulty in installing this equipment. A minimum of four officers independently evaluate ergonomic factors, and Michigan State Police Communications Division personnel then evaluate each vehicle on the ease of equipment installation.

A total of three communications factors are evaluated on a scale of one to 10 and averaged among all the testers. The final score is the overall average of all three factors, including dashboard, trunk and engine compartment accessibility.

A total of 27 ergonomic factors are evaluated on a scale of one to 10 and averaged among all the testers. The final score is the overall average of all 27 factors, such as seat design, padding, ease of entry, head room, instrument placement, HVAC control placement, visibility and ease of entry and exit. 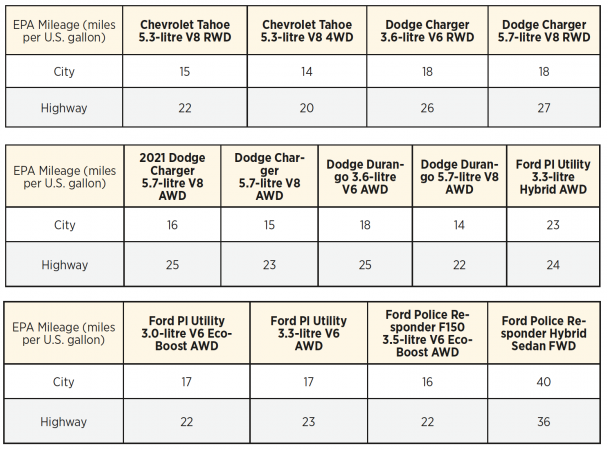 Find this article in our February 2020 edition here.

Dave Brown is Blue Line’s firearms and police vehicle contributor, as well as the Best Dressed Police Vehicle Awards judge. He is a tactical firearms trainer and consultant based in Winnipeg, Man. He can be reached at dave@bulletproofset.ca.


Related
Most capable, fuel-efficient vehicles lead the way into 2018 – Results from the Michigan State Police vehicle tests
Are exhaust leaks poisoning police officers?
“You only have minutes…” Why every officer needs an individual first aid kit
2019 marks “one of the most interesting years for police cars in decades”