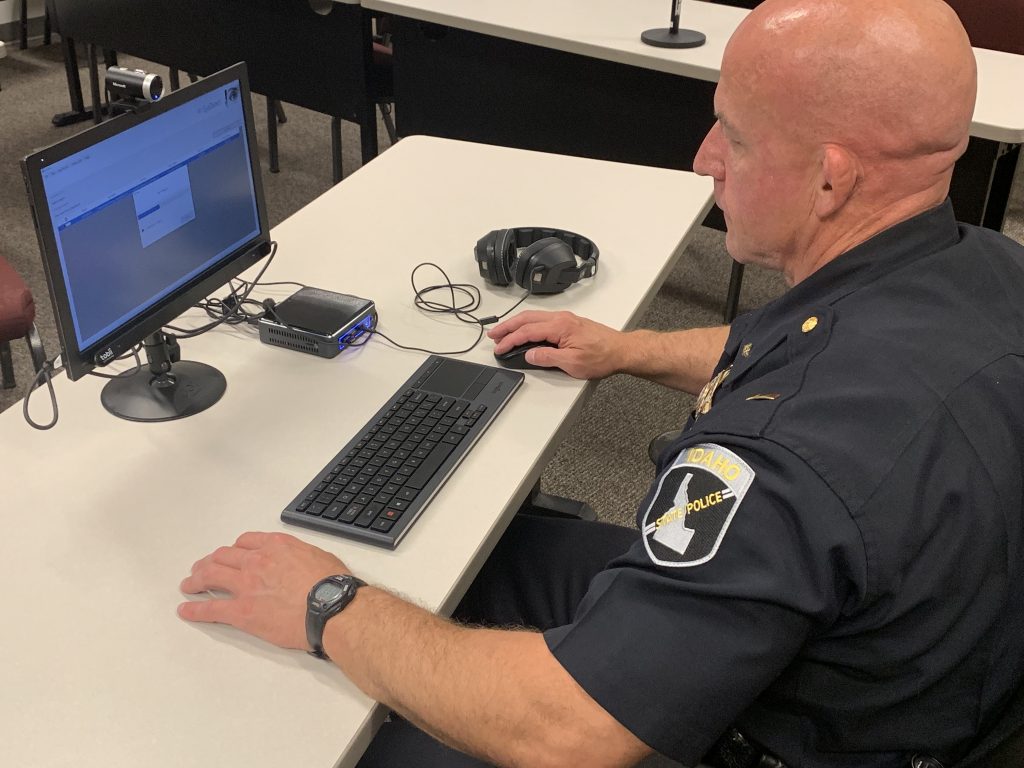 While attending the Canadian Association of Chiefs of Police (CACP) annual conference and tradeshow last summer in Calgary, Alta., a fellow exhibitor told me about an “unbelievable” piece of technology I had to see for myself — and it wasn’t even the technology being showcased at his own booth. He was referring to EyeDetect, an automated, computer-based “breakthrough” in uncovering lies.

The exhibitor, who asked to remain anonymous, said he was ex-military.

“I was in the special forces and I was trained to beat polygraphs,” he said. “I couldn’t beat this.”

EyeDetect is an ocular-motor deception test (ODT) — meaning it measures eye behaviour to evaluate the credibility of individuals. It is a product from Converus, a provider of “scientifically-validated” credibility assessment technologies headquartered in Utah. It was first launched in 2014 to the Latin America market, but it’s still fairly new to the Canadian one.

“I’d heard of the ‘new polygraph’ but I hadn’t tried it until now,” the ex-military source continued as he led me to the EyeDetect booth. “I spent a lot of time looking at the questions… It’s well done.”

An EyeDetect test starts with the examinee sitting in front of an EyeDetect computer with an infrared eye-tracking camera mounted below the monitor. The eye-tracker takes 60 measurements per second of involuntary eye behaviours — including pupil dilation, blink rate, and other eye movements — to detect deception while the examinee answers a series of true/false questions. At the conclusion of the test, the data is uploaded to a secure cloud server and analyzed by computer algorithms. In less than five minutes, according to Converus, the person is scored as either credible or deceptive.

EyeDetect is not a polygraph as polygraph measures various psychophysiological indices. However, it was developed by the same scientists who developed the polygraph technique called the Utah Approach to the Comparison Question Test (CQT). What’s more, two members of the Converus Science Team, Dr. John Kircher and Dr. David Raskin, are credited with inventing the world’s first computerized polygraph in 1991. Kircher, along with his colleague Dr. Doug Hacker, originally conceived the concept behind EyeDetect in 2002.

Both the polygraph and this newer, non-intrusive credibility assessment method are proven technologies, according to Converus, and both have roles to play in modern law enforcement.

“It will never replace the polygraph and should never,” says Mark Handler, a polygraph examiner and former police officer. “You need the polygraph… but when the polygraph is not available, [EyeDetect] is an exceptional alternative because it’s as accurate. I believe in it.”

“Of course, my first thought when I heard about EyeDetect was there was no way anything can work better than what I do. My own cognitive dissidence kicked in and I got very defensive of my first love, polygraph,” he says. “Then I started to look around at the research behind EyeDetect. When I saw Dr. John Kircher and some of the other folks who were behind it, like Dr. Hacker and Dr. Anne Cook… I know them and I know their excellent reputations. John, to me, is the ultimate scientist… Finding out he was involved opened my mind up and I was willing to read the research.”

EyeDetect has formats that can be used in two arenas: for diagnostic testing and for pre-employment or employee screening.

The company says screening tests take about 30 minutes, are 86 per cent accurate and are ideal for evaluating job applicants or current employees on various topics.

One year ago, EyeDetect added a new 15-minute Directed Lie Comparison (DLC) test — a test technique commonly used in criminal investigations or civil cases. This meant EyeDetect could now be used in situations such as sexual assault, murder, sexual abuse of a child, spousal abuse, parole or treatment violations, or infidelity.

The DLC test protocol is a technique originally developed for polygraph and is used primarily for conducting diagnostic or single-issue tests. Diagnostic tests take about 15 minutes, are 90 per cent accurate, according to Converus, and target specific questions.

In polygraph, there are a number of testing techniques considered validated. Some examples are the Concealed Information Test (CIT), Directed Lie Screening Test (DLST), and the Utah technique. With EyeDetect, there are now three techniques: DLC test, Relevant Comparison Test (RCT) and Multi-Issue Comparison Test (MCT). Since EyeDetect’s release, it’s been used principally as a screening, or RCT, test.

When EyeDetect is used in conjunction with the polygraph, and when both tests have the same result, Converus states the confidence in the test outcome can be as high as 97-99 per cent.

Currently, there are two federal agencies in Canada that have purchased EyeDetect equipment.

“Unfortunately, we cannot release their names publicly due to confidentiality agreements,” notes Jeff Pizzino, vice-president of Converus corporate communications. “We have nearly 50 law enforcement customers in the U.S. and nearly 100 worldwide.”

One of those customers is the Idaho State Police (ISP). It first adopted EyeDetect in 2016 as its pre-screening lie detection technology for job applicants.

Lt. Matt Sly of ISP oversees the polygraph unit and has been a certified polygraph examiner since 2008.

He encourages others in law enforcement to fight past their fear of the unknown, as “often times, we’re our biggest enemy when it comes to doing this job because we become comfortable with doing things a certain way and we need to be able to adjust with the times.”

Even though ISP notes it believes polygraph should remain a vital part of the pre-employment hiring process, the agency says it saved time and money by not using polygraph on its first 19 applicants that had already passed an EyeDetect test. The agency also discovered that when applicants failed EyeDetect, they also failed polygraph.

“The people that have passed and made it through background checks, they are good, honest employees,” Sly adds. “It’s also a very standardized test… It takes the human factor out.”
In November 2018, EyeDetect was used to test some of the 11 child sex solicitation crime suspects arrested in a sting operation supervised by the Idaho Internet Crimes Against Children (ICAC) task force in the Boise area. A special agent and polygraph examiner working for one of the law enforcement agencies assisting ICAC was interested in using EyeDetect because at times, according to Converus, his agency doesn’t have enough examiners to immediately test suspects onsite. The company also says the agency was interested in a test that took less time than polygraph as well.

Indeed, a huge benefit to EyeDetect seems to be how it impacts the clock.

“If I were to train you at one of the polygraph schools, it would be a minimum of 10 weeks,” Handler says. “Then, for the actual ability to conduct testing — if you’re in a licensing state, for example — it will take about a year to obtain a license. Even if you’re not getting a license, it takes about a minimum of a year to get comfortable with the process for most people.”

For agencies that can’t afford to or can’t wait to send someone to polygraph school, EyeDetect fills a very important void without losing sensitivity or specificity.

“I can teach you EyeDetect in two hours or less,” Handler says.

That being said, the launch of EyeDetect and its endeavor to continue to grow across the globe hasn’t been without its challenges.

“I believe there is a genuine concern from polygraph examiners regarding EyeDetect and it replacing them as a polygraph examiner,” Sly notes. “Based on our results, we still conducted a lot of pre-employment polygraphs. It does add a little time to the testing process on the front end, usually an hour. But if they pass EyeDetect, we save time not doing a polygraph.”

For Handler, he says in any credibility assessment technology that’s out there, there are always challenges in examining the accuracy of the technologies.

“This is because testing is conducted in a lab with a mock crime scenario and in the field as well — with real police exams from real people who have been cleared or found to have done the wrong thing. It’s very expensive, extremely time consuming and hard to do.”

Another trial to wade through is the willingness for people to accept alternative technologies, Handler points out.

“Let’s face it, polygraph has been the go-to credibility assessment technology — empirically based and proven to work scientifically to certain levels — for about 100 years. We’re the new kids on the block and there’s a reluctance here particularly because they can’t necessarily see the results,” he says. “What I mean by that is, in polygraph, most evaluations or scoring is done by an experienced or trained examiner looking at test data that has manifested into a visual depiction — you see charts. The changes in the measurement of the human body are actually there to see. You are able to evaluate it with your eyes.”

Meanwhile, algorithmic-based credibility assessment technology, like EyeDetect, is based on measurements and algorithms that the person administering the test doesn’t see.
That being said, Handler sees EyeDetect only continuing to expand in the future.

“It was part of my personal journey in this field to realize there may be things out there other than polygraph. And I believe there are. I don’t think we’re done with EyeDetect,” he says.

“Aspects of the polygraph can be capitalized on by using things like artificial intelligence, automated feature extraction, etc. As a whole, the credibility assessment profession needs to be willing to accept that there may be alternative technologies and alternative ways to look at our data in the current technologies.”

“We also do a lot of post-conviction sex offender testing where these folks have already been in prison or they’re on probation and they’re in therapy. They want to make sure they’re not breaking the rules because doing so could possibly lead to reoffending. We help therapists make better decisions about how to treat their patients. Whether it’s a polygraph, EyeDetect or a Ouija board, if it works, if it helps make those better decisions, why wouldn’t we want it?”

For more information on EyeDetect in Canada, contact Nash Yousef at EyeVestigate Inc. at 647-483-6000 or at nash.yousef@EyeVestigate.com. EyeVestigate provides EyeDetect stations and tests as well as the associated training for agencies to do their own testing. Alternately, EyeVestigate offers the service of writing tests and delivering tests on an outsourced basis. Pricing ranges from $35 per test for a single volume purchase of a 2,000+ term test licenses, or up to $2,000 per test for the custom writing and delivery of a specific test for an involved case.