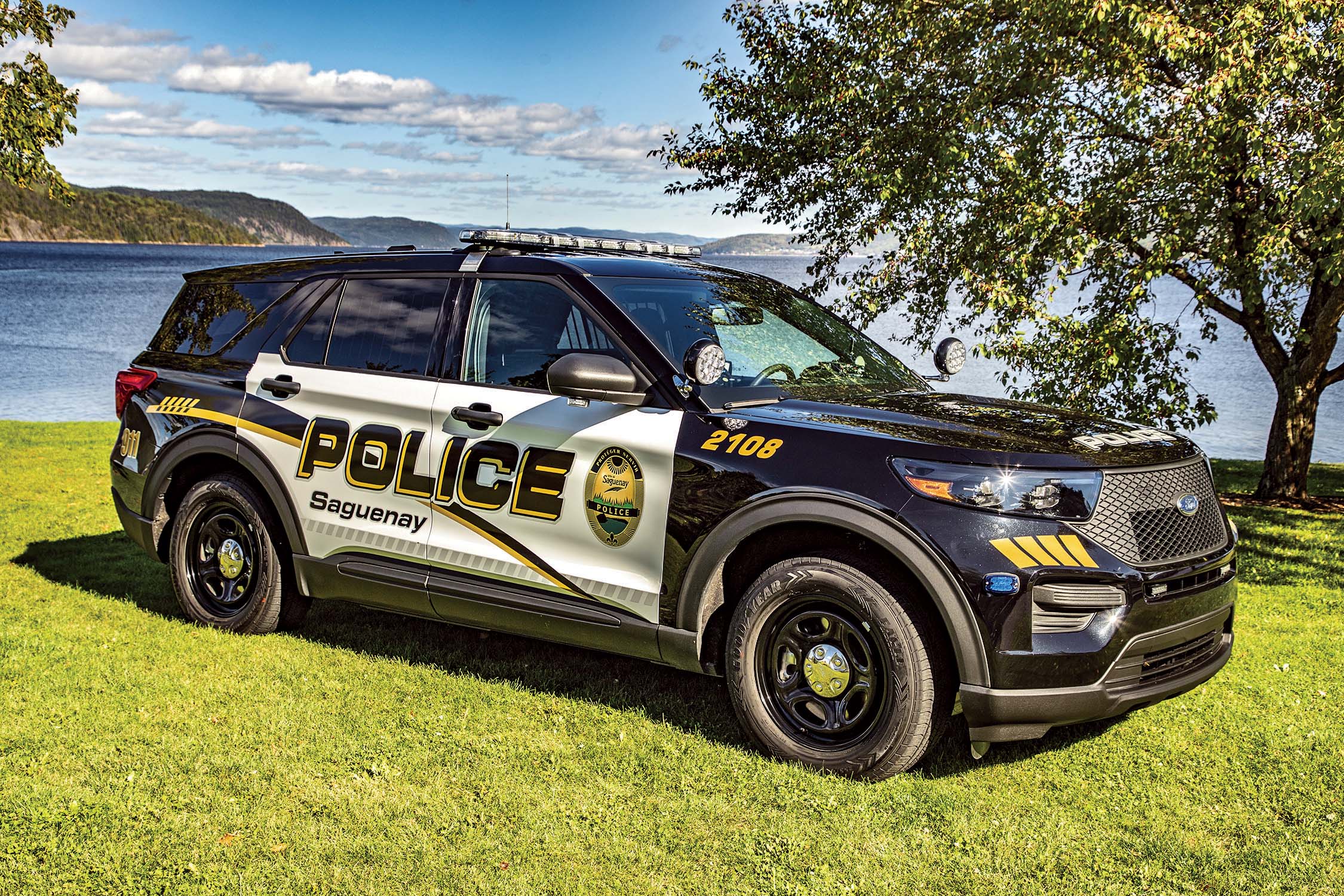 Congratulations to all the winners of Blue Line’s Best Dressed Police Vehicle Awards. We strive to showcase innovative and effective designs. We look for clear identification, graphic designs that enhance visibility, elements that show directionality of travel, and impressive integration of equipment and controls. Of course, we also take “green” vehicles into consideration.

Thank you to everyone who submitted. Stay tuned to blueline.ca for 2022’s call for submission later this fall. 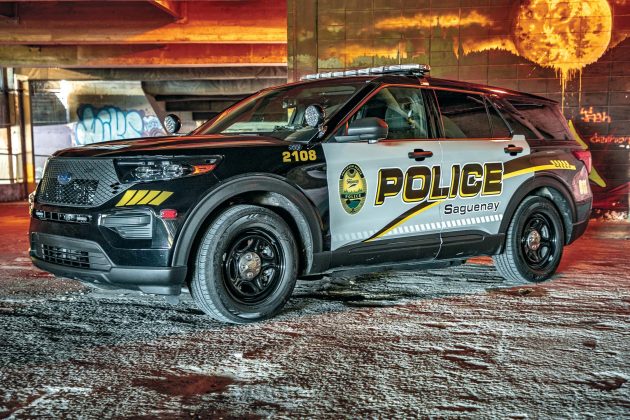 Quebec’s La Service de police de Saguenay didn’t want to showcase just any design for their 2020 Ford Explorer—they wanted a highly-visible and recognizable design immersed in meaning. The 2020 Ford Explorer has a hybrid engine, all-wheel drive and an automatic transmission.

The department was created in 2002 with the amalgamation of Chicoutimi and Jonquière municipalities. The oval shaped logo on the side of the vehicle matches that worn daily by the department’s officers. In their submission, Captain Jerome Paquet wrote the logo, designed in 2015, was designed to represent the geographical features of the area. Surrounded from north to south, the Mont-Valin National Park to the Laurentides wildlife reserve, the forest (represented
by the green in the logo) is a symbol of Saguenay’s forestry economy and tourism. The blue and black colours represent the Fjord and Saguenay River. This vast river cuts across Jonquière and
Chicoutimi then forks into an immense bay right in the middle of the La Baie district. The three lines under the word Saguenay represent the three unified districts. The 3D word ‘Police’ on the side represents their presence within the three districts. The logo was designed closely with union members, management services and an external firm.

Judge Dave Brown, our fellow firearms and vehicle contributor for Blue Line, said he was struck by how the vehicle stands out in a night setting.

“Saguenay is a great design and certainly has both a ‘wow’ factor and great directionality,” he said. “I really appreciate the meaning behind their design and a real community identity, with the way the swooshes represent the two rivers flowing through their community.”

Paquet said the department was thrilled to hear the results of the contest.

“The Service de police de Saguenay isvery proud to win this award,” he said. “The
visibility of this contest across Canada helps to increase the pride and professionalism of our police officers. These values are important to our organization.” 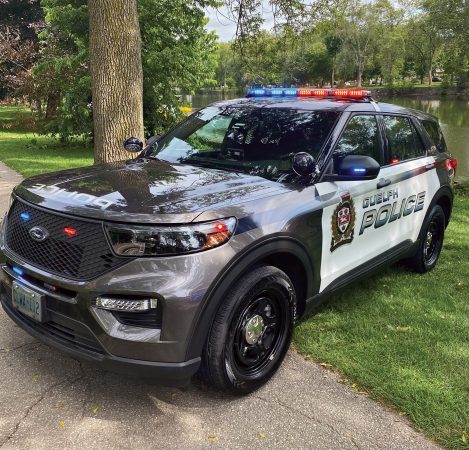 In 2019, when Guelph Police Chief Gord Cobey announced that Guelph Police Service would be the first in Canada to commit to an entire hybrid-marked fleet, the department decided timing was right to evolve the design to align with this direction.

In the vehicle submission, Guelph saidthat, instead of including the bright and bold red/blue colours to the package, they decided to have a solid singular stripe on either side which incorporated both. This solid stripe transitions from muted blue to muted red with a subtle gradient.

This stripe package utilizes 3M Cast Vehicle Reflective, digitally printed and contour cut material: durability, high visibility and longevity. The two-tone base design captures both a nostalgic feel, while maintaining a distinctive police flavour. The higher visibility material and the less aggressive design lends itself to a safe and appealing vehicle. Guelph asserts that officer and public safety was a significant factor in choosing the design and clearly identifies it as a police vehicle. The placement and proportionate size of our services crest on the side of the vehicle
symbolizes the department’s values: pride, service and trust.

“Guelph’s design is really nice. I like the gradient transition in the stripe from blue to red,” said Judge Dave Brown. “The word ‘POLICE’ really stands out.”

The hybrid crests were included in the design with a touch of green to signify the department’s commitment to environmental
stewardship. The transition to hybrid technology aligns with the City’s goal to be a net zero carbon community by 2050.

“Our new cruiser design promotes the message that our police service upholds our city’s environmental values. While Officers patrol the city, serving the community, they are representing an environmental commitment to future generations.” 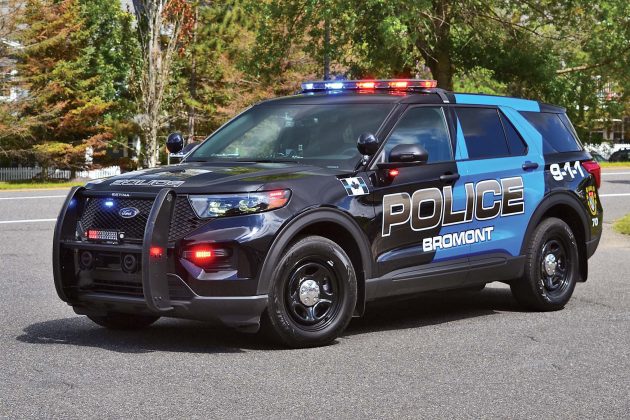 Le Service de police de Bromont wanted to implement a design to remember for their 2020 Ford Hybrid Police Utility Interceptor. They chose a design that paid homage to Vincent Roy, the fallen Bromont police officer who was struck by a motor vehicle in 2011.

This vehicle has a 3.3L Hybrid engine and a 10-Spd Modular Hybrid Trans/Automatic transmission. In their submission, Const. William Healy wrote that the black patrol car with a wide blue line was inspired by a similar design used by a police department in the United States. The service decided to lay a thick blue line on the black vehicle and use reflective material for the word ‘POLICE’ on each side was “simple and functional with a sleek, contemporary design.”

Judges Dave Brown and Rylan Simpson were in agreement and liked the simplicity of the Bromont design.

“I also really liked the directionality of the thick blue line and that the word ‘POLICE’ really stands out from the border, which is a factor really important to me as far as officer-safety, plus the gradient really works with this design,” said Brown. “I also really like the nod to a fallen officer that serves as a reminder that these are the people who put their lives on the line every day to serve the citizens of their community.” 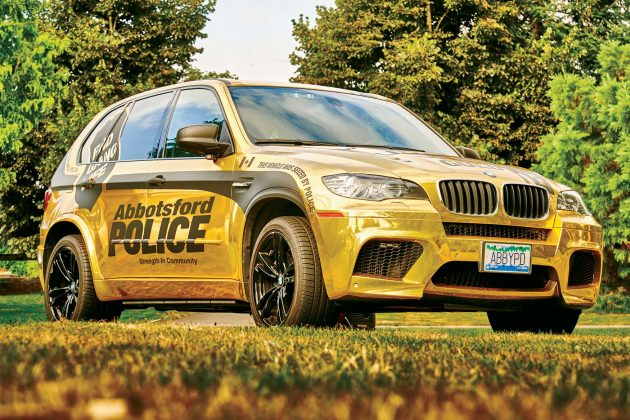 In their submission, the department said they selected the golden foil due to its ability to garner attention and spread the department’s message and their goal to “Ending Gang Life” by creatively illustrating the costs of and dispel stereotypes about the “gang lifestyle”. Black matte was used to complement and provide balance to the golden “bling”/messaging component of the design.

Sgt. Kelly Joiner and Insp. Casey Vinet developed the vehicle design with feedback from police officers and civilian employees to ensure the intended educational message was clear and identifiable. The vehicle has a statement alongside the hood, which reads: “This vehicle was seized by police” and the message on the hood reads: ‘Don’t be fooled. All that glitters is not gold” , which connects with the anti-gang messaging.

“This vehicle represents the nexus between style, functionality and messaging. It clearly identifies itself as a police vehicle with its bold ‘POLICE’ branding but does so in such a way to highlight its key focus and purpose, which is to help deter gang involvement,” said judge Rylan Simpson. “This vehicle is a functional and creative example of how police vehicles can be used to both attract public attention to policing interventions while simultaneously promote awareness about important criminal justice topics.” 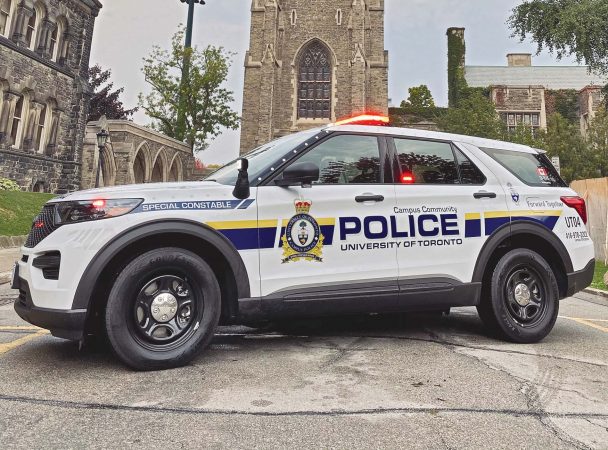 To celebrate 116 years of providing community-based policing, the University of Toronto Campus Police Department decided to redesign their fleet. It is simple, yet effective design was chosen to represent and align with the department’s mission. The hybrid vehicle was chosenas a contribution to the university’s goal of sustainable practices by reducing the service’s carbon footprint and 80 per cent of the fleet is now hybrid.

“University of Toronto Campus Police vehicle neatly identifies itself as campus police and highlights the colours of the University of Toronto,” said Judge Rylan Simpson. “It features the department’s slogan, “Forward Together”, and smooth lines and reflective markings that enhance both the visibility and aesthetics of the vehicle.”

The 2020 Ford Police Interceptor Utility fleet prominently features the University’s official colours (blue and gold) in a dual-tone stripe running along the side of the vehicle. The angled design of the stripes depict progression and movement, reflecting the lively nature of campus life. Special attention was paid to the lighting and equipment package to ensure frontline members have the tools to perform their duties more effectively and safely. The comprehensive 360-degree lighting and the new remote spotlight was also included to increase visibility for frontline members, directly contributing to enhanced officer safety. 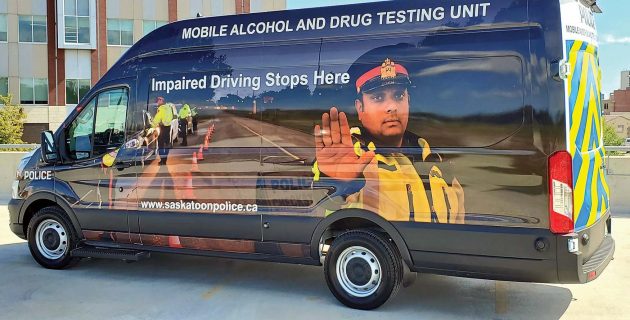 “We also made the decision to turn the vehicle into a kind of roving billboard by wrapping it with anti DWI imagery,” explained Sgt Patrick Barbar.

Specially designed for use as part of impaired driving enforcement, the vehicleis used as a mobile workstation for activities related to impaired driving investigations. The side decal image of an officer dressed in high-visibility apparel signaling motorists to stop as officers actively conduct a roadblock, clearly highlighting the vehicle’s purpose.

“I think Saskatoon Police has to be thehands-down winner for the Special Service category,” said judge Dave Brown.

“The vehicle’s messaging doubles as a proactive attempt to deter motorists from driving impaired while non-operational (while mobile) and a reactive attempt to catch motorists who make the decision to drive impaired while operational (while stationary),” wrote Simpson in his judging review. “Its markings, including those on the rear of the vehicle, also make it highly visible and less likely to be struck while being used operationally.”

Funding for the unit was obtained through the Ministry of Corrections and Policing’s Civil Forfeiture program ($50,000) as well as through Saskatchewan Government Insurance ($25,000). The Saskatoon Police Service covered any
additional costs.

Thank you to Dave Brown and Rylan Simpson, Blue Line’s Best Dressed Police Vehicle judges for their expertise and dedication to this content.