Features
A building suited to the changing face of law enforcement 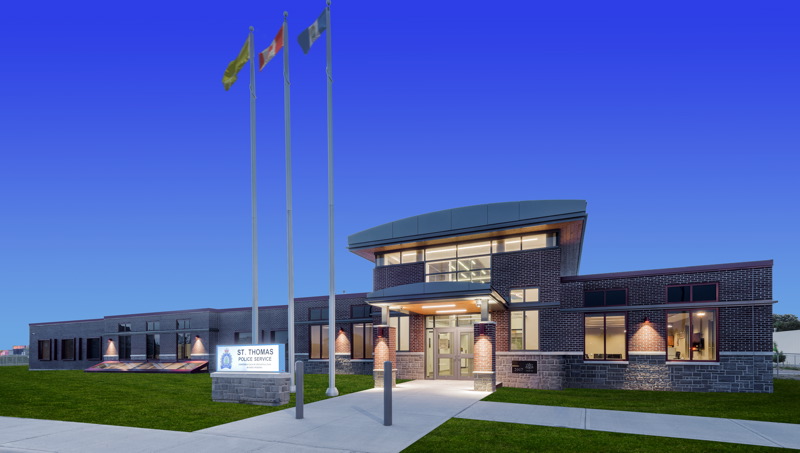 The new St. Thomas Police Service building exemplifies the changing face of law enforcement. The facility’s layout shows how policing has become more community-friendly since the previous, now-demolished station was built in the early 1970s.

We, as the architects who managed the project, tried not to make it look like a police station. It’s recognizable; it stands out in the area. But it’s not a concrete box.

The building’s architecture sets a friendly tone with an easily identifiable double-height, vaulted entry. At night, its windows glow, transforming the entry into a beacon with a welcoming street presence. On the façade, paired tall windows with clerestory openings above, and the materials palette of a limestone base with warm red brick, have a comforting, domestic scale.

“We have a great facility thanks to the community of St. Thomas, city council, the police services board and past chiefs,” said Chief of Police Chris C. Herridge in a recent interview. “In the old building, a number of officers worked in the basement. Sometimes the only time they got to see daylight was when they went out.”

One of the big complaints about the old building was, “It’s so dark.” That’s a health-and-safety issue now. In the new building, an expansive skylight above the open stairway creates a column of light that penetrates down to the basement and its open lunchroom area.

Another problem with the old quarters was its devil-may-care mash-up of disparate user groups.

“We were transporting prisoners, victims of crime and children all in the same hallways because of the lay-out and the functionality of the building,” Herridge said. “People who wanted to do their police checks or use the elevator to get upstairs to the courts had to go back in the cell block, where all the prisoners were.”

“Here, the elevator is just off the front foyer to get down to the lower level, where we have a community room,” Herridge said. The space is used for education and outreach programs. “We did not have that in the old building. When you can invite your community partners into your house, it builds relationships with those partners.

“We have interview rooms here for children and victims of crime. Again, you don’t have to go into the inner working space of the police facility. Not only are prisoners intimidating, even,” he said, pointing to himself, “this police uniform can intimidate; [some] people are uncomfortable around police officers. So, having this public area right here is conducive to keeping people happy and calm. That’s why I call this a community-friendly police building.”

In the old building’s layout, cross-contamination imperiling the chain of custody was collateral damage. Prisoners and evidence would go through the public lobby with numerous people sitting in it. A lawyer could have a heyday with that.

Of the new building’s dedicated evidence room, Herridge said, “Evidence goes into a one-way locker. Only our property officer can retrieve it, from the other side. It’s catalogued, tagged and placed in the proper storage area. We can articulate when evidence came in, where it went and who had contact with it.

“DNA evidence is extracted here and sent to the Centre for Forensic Science [in Toronto]. If you bag something that’s still wet, you run the risk of mould. We have multiple drying cabinets so that when we get soiled clothing where we’re looking to extract DNA, we avoid cross-contamination; it’s all very sterile.”

The new facility accommodates staff positions undreamt of when the old facility was new. “We didn’t have a lot of cybercrime back then like we do now,” Herridge continued. “Now we have a cybercrime location. White-collar, drug and serious crime that requires investigation by detectives has increased. Now we have more detectives, a street-crime unit and a canine unit [with adjacent outdoor run]. We had our largest drug bust in history a few months ago, with $500,000 worth of fentanyl and crystal meth in St. Thomas.”

In the new building, detainees don’t mingle with members of the public because a sally port leads directly to the jail cells. There, the one-piece structure incorporating the sink and toilet is made of stainless steel rather than porcelain, which can be shattered into hazardous, sharp glass shards. Flush controls are in the hallway to prevent detainees from concealing contraband substances.

The lack of cell bars, the high ceiling and the smooth inner door surface ensure a ligature-free environment, with no points for prisoners to attach a cord to injure themselves. To that end, the cell ceiling is a one-piece flat concrete roof deck instead of the steel deck and support beams prevailing elsewhere in the building.

Further to eliminate ligature risk, and the bother of laundry and storage, the concrete wall benches (in lieu of beds) have heating tubes inside. Also, as designers we had to focus on avoiding any perception of mistreatment, such as having to sit or sleep on a cold, unheated concrete bench.

The new building does away with the traditional barred cell. Instead, doors are fitted with bullet-resistant windows. A narrow slot in the door opens from the hallway side for passing food trays. This is a new standard that police across Canada and the U.S. are gradually implementing.

The trend is driven by the type of incidents police run into. With bars, if you gave detainees food on a tray, they can use it as a weapon by turning it sideways and sticking it through the bars at you.

To ensure buy-in from police staff, our firm began with a strategic process. Once we had devised the overall floor plan, we gave each room’s plan to Chief Darryl Pinnell, the previous police chief, who distributed them to the staff. They, in turn, jotted down their input.

The extensive consultation paid dividends, 10 years later, in a sense of ownership and pride when the new building opened. “We had so many people involved with our moving days who stepped in and came in off duty to help out,” Herridge said. “Everyone was just so excited.”

Travis Forrest, associate partner at the Brantford, Ont., office of +VG Architects (formerly The Ventin Group), managed the St. Thomas Police Service project team. He has led the design and construction of over a dozen Ontario civic buildings, including police stations for the City of Pembroke, Town of Cale-don, and Wellington and Renfrew Counties.